a memorial space for a soul

a memorial space for a soul

The installation project ‘Third Nature’ was part of the Shelter for Soul Campaign, which was exhibited at Seoul Hall of Architecture and Urbanism in South Korea held on September 9, 2019, to September 20 2019.

Builders as a Mission International) 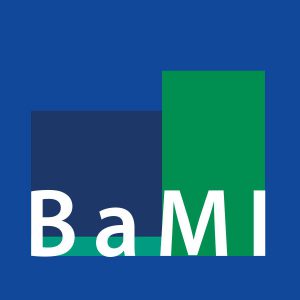 The installation project ‘Third Nature’ was part of the Shelter for Soul Campaign, which was exhibited at Seoul Hall of Architecture and Urbanism in South Korea held on September 9, 2019, to September 20 2019. The goal of the campaign is to address the issue of social minorities, challenging designers to come up with a shelter for one person, which could illustrate different approaches in dealing with the selected social group.

Third Nature is a memorial space narrated through a story of a mother who lost their sons from the landslide at the Ghazipur landfill near Delhi, India. It has the height of a 17-story building as tall as the Taj Mahal. (reported from the New York Times on June 10, 2018)

The pavilion aims to simulate the physical environment where waste material has become a dominant construction component. The consumption phenomenon of plastic products creates the ‘third nature’ environment between the natural landscape and artificial plastic

As part of the design and installation competition organised by BAMI (Builders As a Mission International) in cooperation with the Korean Institute of Architects, the organisers are searching for a “Soul shelter for one” with a question “Can space heal?”. The intention is to bring attention to marginalised social groups then use the design as a prototype to solve the issue. The project ‘Third Nature’ was among the 15 finalists and was selected for Special Selection Award. The project started with a simple question How much waste do we produce daily? Waste seems to be an inseparable part of our daily basis. In 2018 the world generated 2.01 billion tons of garbage. In India, one person makes 0.57 kilograms of trash per day, while in South Korea produces 1 kilogram of trash per capita per day. These enormous amounts of waste dumped create piles of trash
mountains in a landfill. About 50% of trash going to landfill while 26% is recyclable and 20% are compostable or used for energy production. 40% of landfill is filling with plastic packagings, bottles, containers.

Landfills have become a solution for today nations dealing with the waste problem. In the midst of dystopia we endure, a minority of families has no choice but to cope with the existing situation. For some families, they have to earn their living from it. Near the centre of Delhi the capital of India, the Ghazipur village is situated near the 17-story high mountain of trash as tall as the Taj Mahal. The Ghazipur dump polluted the air and intoxicated the water in a wide radius. The Ghazipur villagers who live next to the landfill has witnessed the rapid accumulation of trash, average 4,000 tons to 10000 tons daily. Imagine a family living in the area, where airborne particle fumed with toxic in the air and water in the nearby canal runs yellow. To earn their living, some start to pick up found objects from the dumpsite and sell to the informal recycling factories. As the site is not well-regulated, the ragpickers are risking their lives while working in these unstable pile of trash. 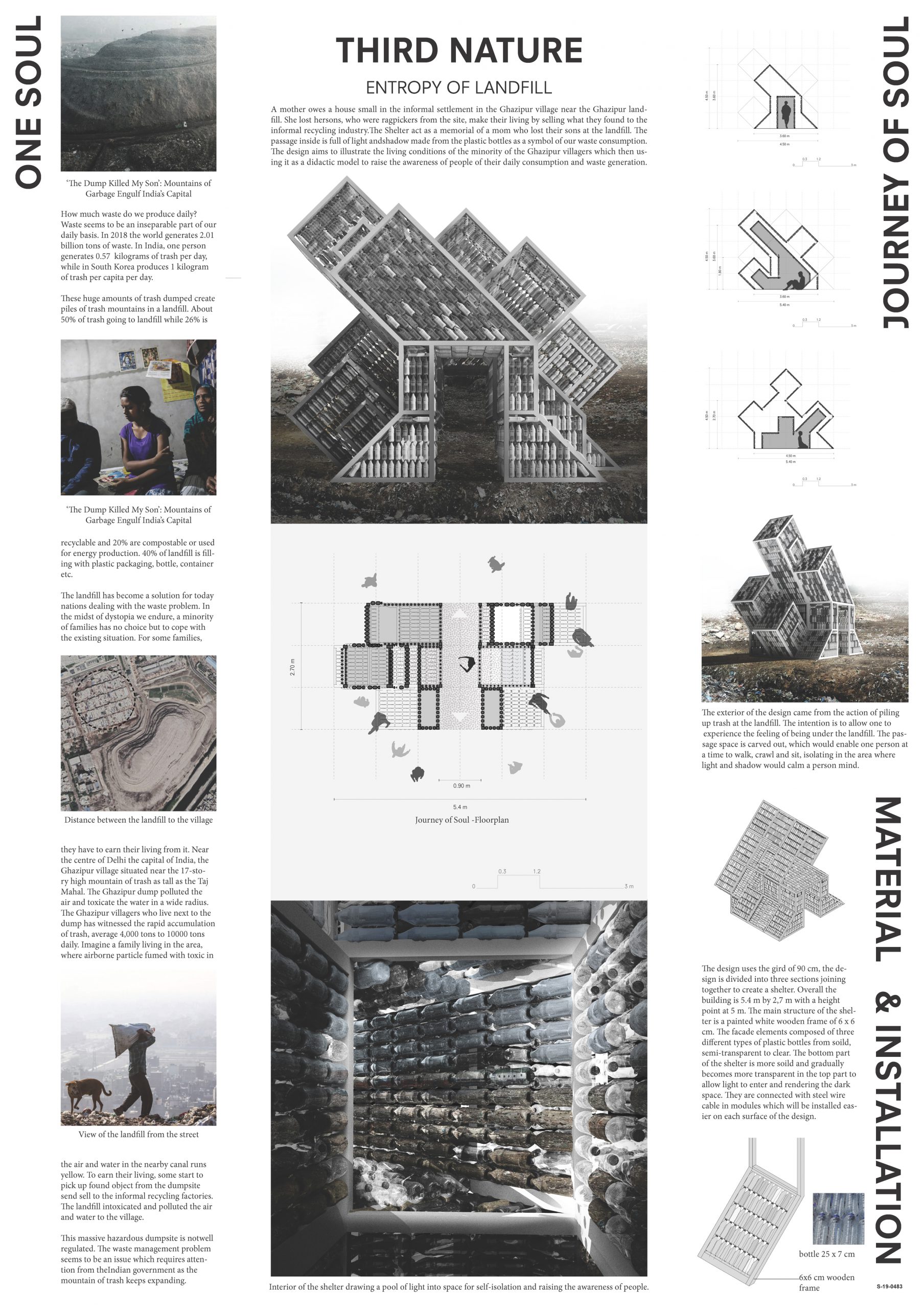 “The dump killed my son,” she said. (reported from the New York Times on June 10, 2018)
A mother owes a house small in the informal settlement in the Ghazipur village near the Ghazipur landfill. She lost her sons, who were ragpickers from the site, make their living by selling what they found to the informal recycling industry. The Shelter act as a memorial of a mom who lost their sons at the landfill. The passage inside is full of light and shadow made from the plastic bottles as a symbol of our waste consumption. The design aims to illustrate the living conditions of the minority of the Ghazipur villagers, which then using it as a didactic model to raise the awareness of people of their daily consumption and waste generation.

The exterior of the design came from the action of piling up trash at the landfill. The intention is to allow one to experience the feeling of being under the landfill. The passage space is carved out, which would enable one person at a time to walk, crawl and sit, isolating in the area where light and shadow would calm a person’s mind. 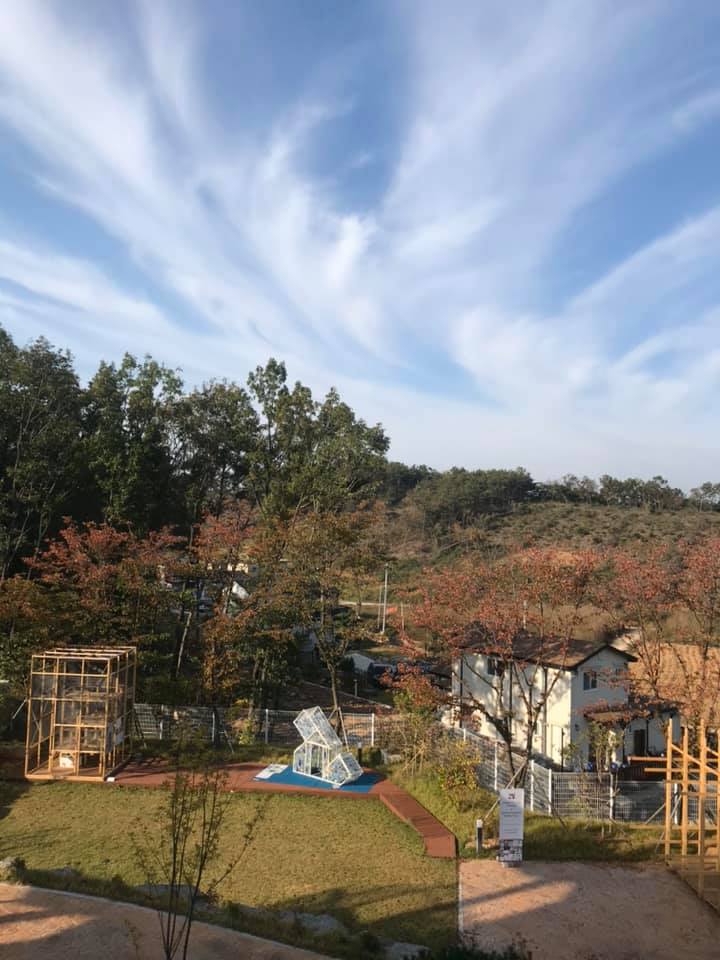 Part 3: Material and Method of Installation

With the tight budget given and time limitation for installation, one of the three components was built with a reduced scale of the original design by 40 per cent. The main structure was replaced from timber to PVC water pipe. Nevertheless, the prototypes still convey the main idea of the issue of waste production — the facade elements composed of three different types of plastic bottles from solid,semi-transparent to clear. The bottom part of the shelter is more solid and gradually becomes more transparent in the top section to allow light to enter and rendering the dark space. They are connected with steel wire cable in modules which will be installed easier on each surface of the design.