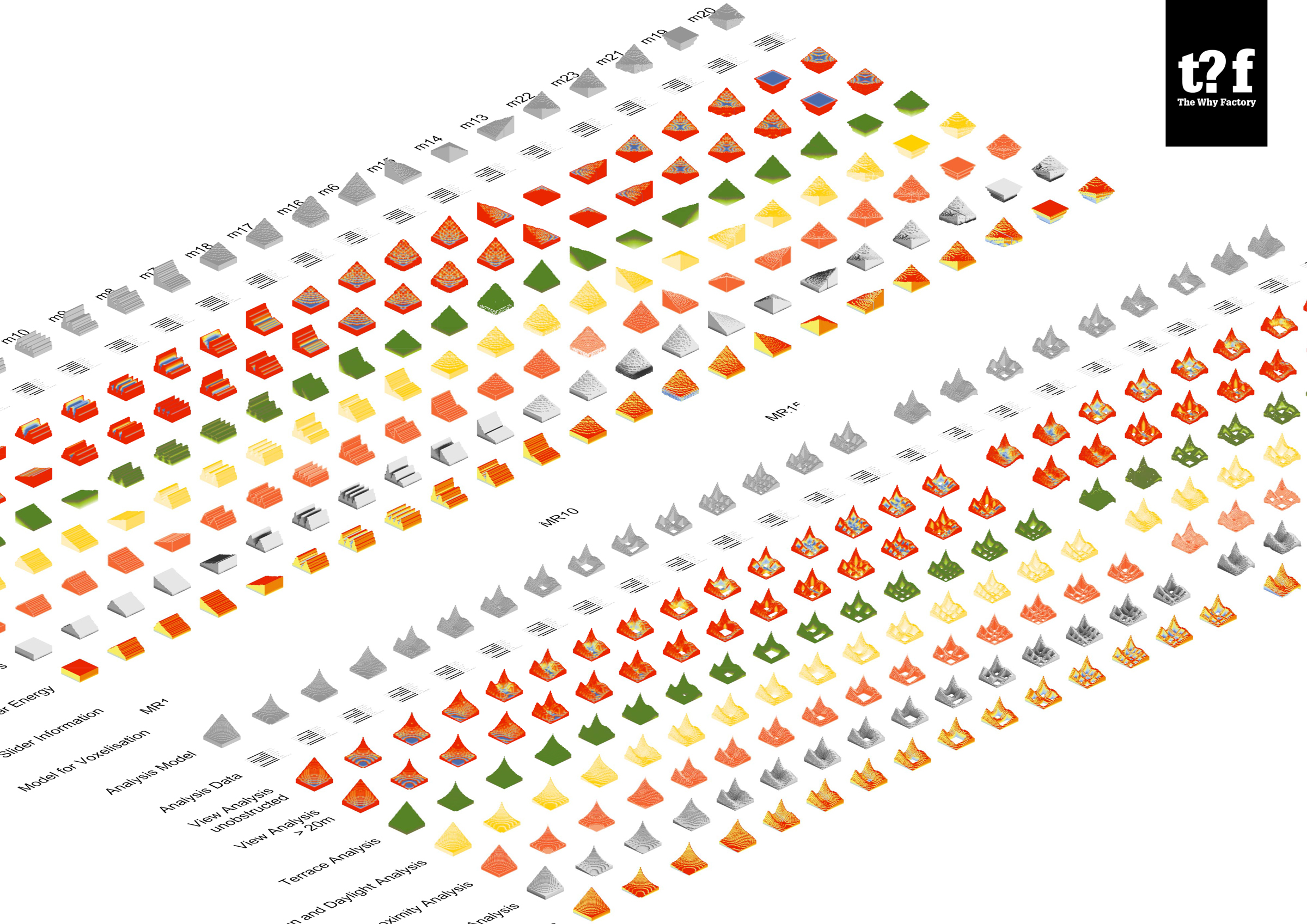 What’s make a housing block? Research on Mass and its transformation of a simple question
“What if we could live self-sufficiently with Solar Energy?”. The Solar Mountain is where housing qualities and solar energy are negotiating.

The Why Factory’s research design studio operates on the exchange of collective work and individual project. Implementing from the studio’s common framework, The Blockmaker, the studio’s research explores the notion of what makes a housing block? Through data to the design approach and parametric software thinking, the Blockmaker is research software that allows one to generate multiple design solutions by transforming mass, reconfiguration of programs, accessibilities, porosity and generating options for façade and structure responsively to a climate condition.

For the Solar Mountain, the research question speculates on a scenario where a housing block would be self-sufficient with solar energy. How would it look like? How would it performs for power generation and at the same time generate better housing qualities for views, daylight and terraces? Can it create better qualities for a dwelling? In this studio, we add one parameter to observe the changes in our design intervention. In my case, for a block to be self-sufficient with solar panels, a parameter of energy demands with solar panel surfaces would be a primary aspect to consider. However, to make a housing block, it requires multiple parameters of housing qualities to finalise an optimised design decision.

Blockmaker is the Collective Framework of T?F, The Why Factory Graduation Studio of 2016/2017  (credits cited at the end of the page) 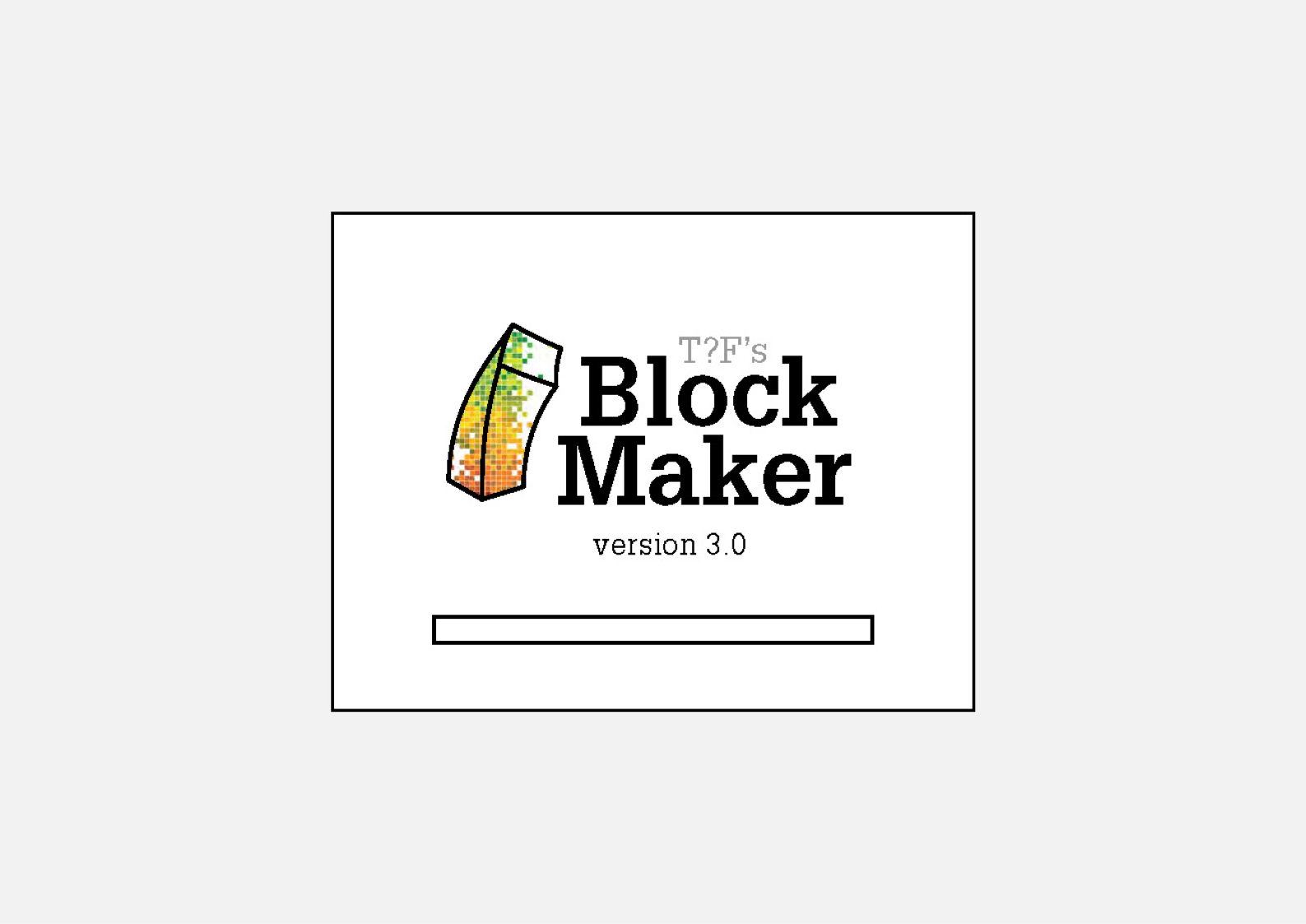 The Block Maker is software that would explain the initial notion of the studio’s framework. One of the objectives of this parametric software is to be able to generate a city block based on different ‘what if’ scenarios and Floor area ratio. Through different Grasshopper scripts of geometry transformation, the software would generate a series of blocks with different qualities of daylight, views, and solar radiation. Through the exploration of this collective work, it has evolved the studio’s framework as well as the design methodology of the individual project. Therefore, eventually, the individual project could feedback and update this software later.

THE BLOCK MAKER AS BLUEPRINT – for a collective framework we, the T?F 2016/2017 used as a framework to generate mass and volume-based different research topic we chose. 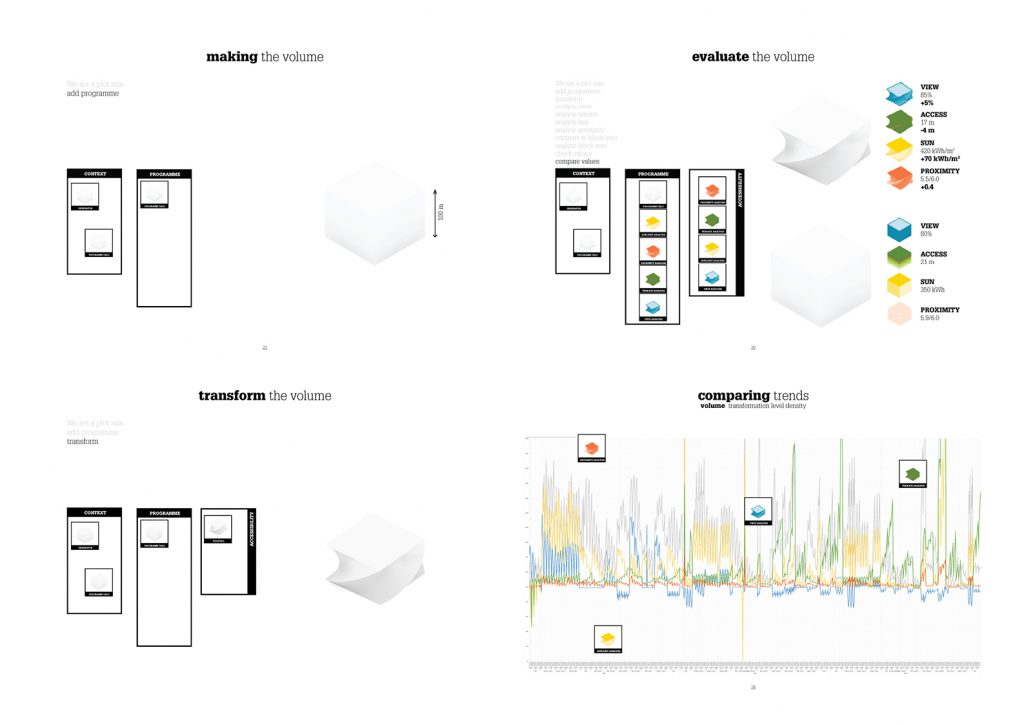 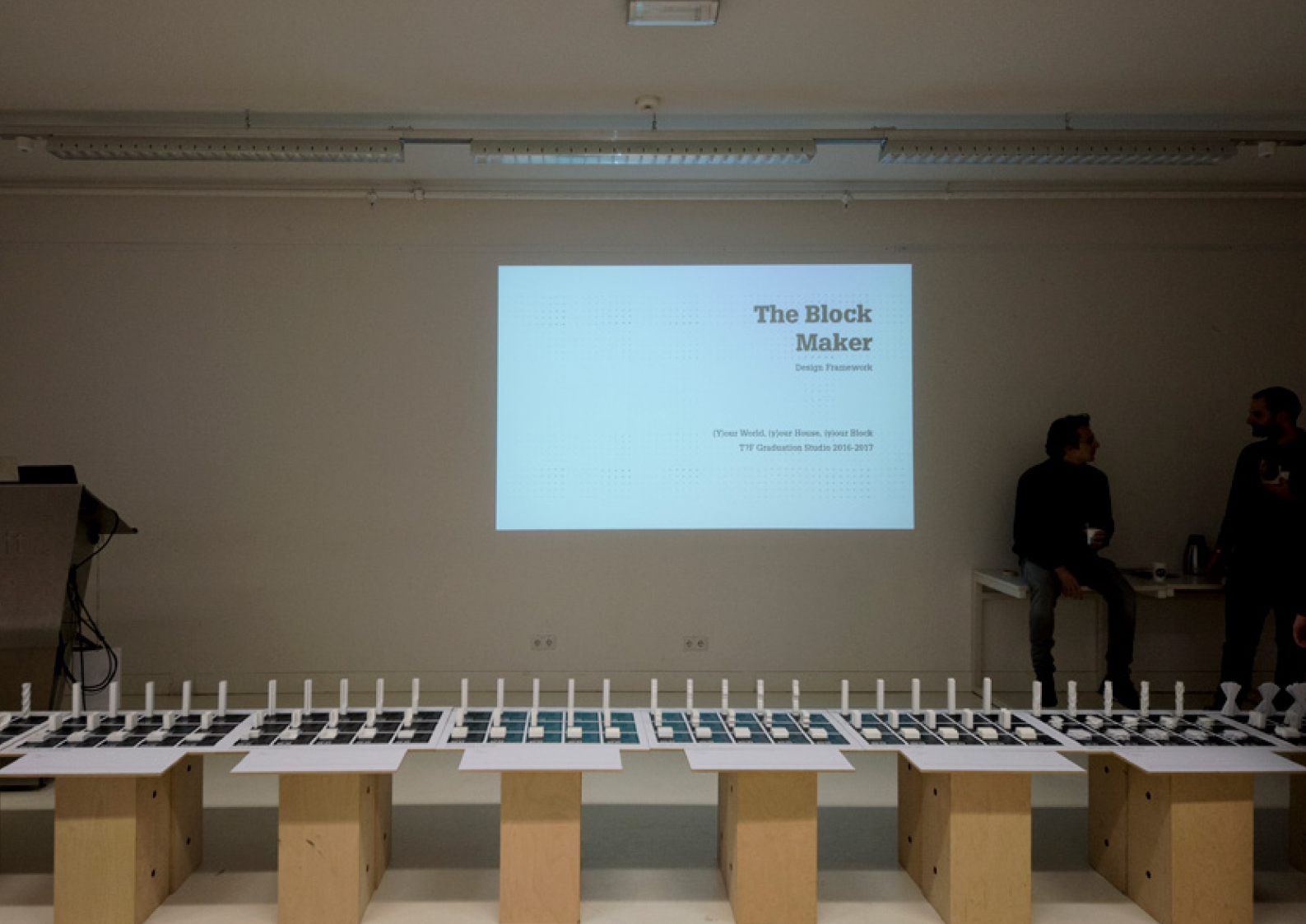 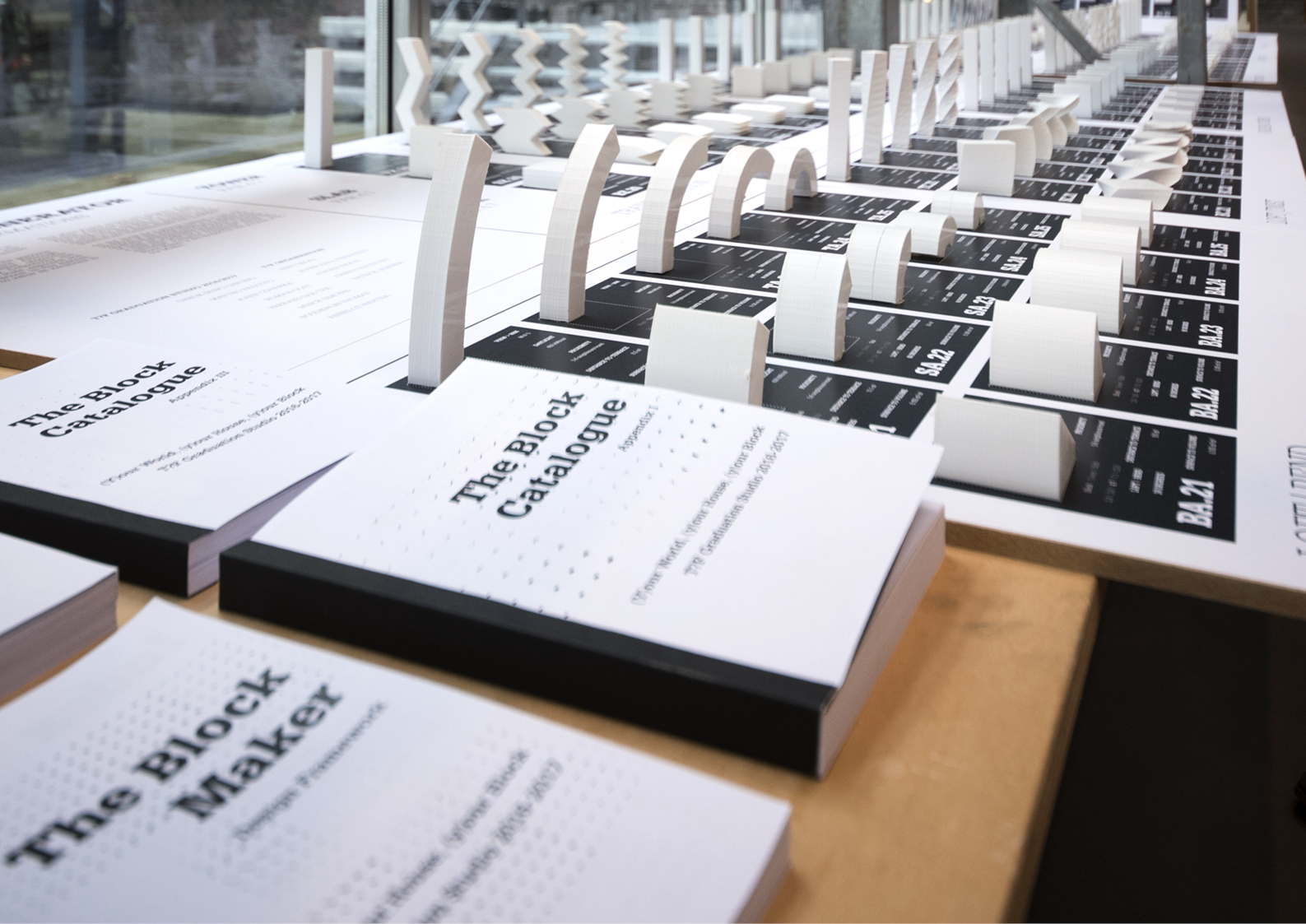 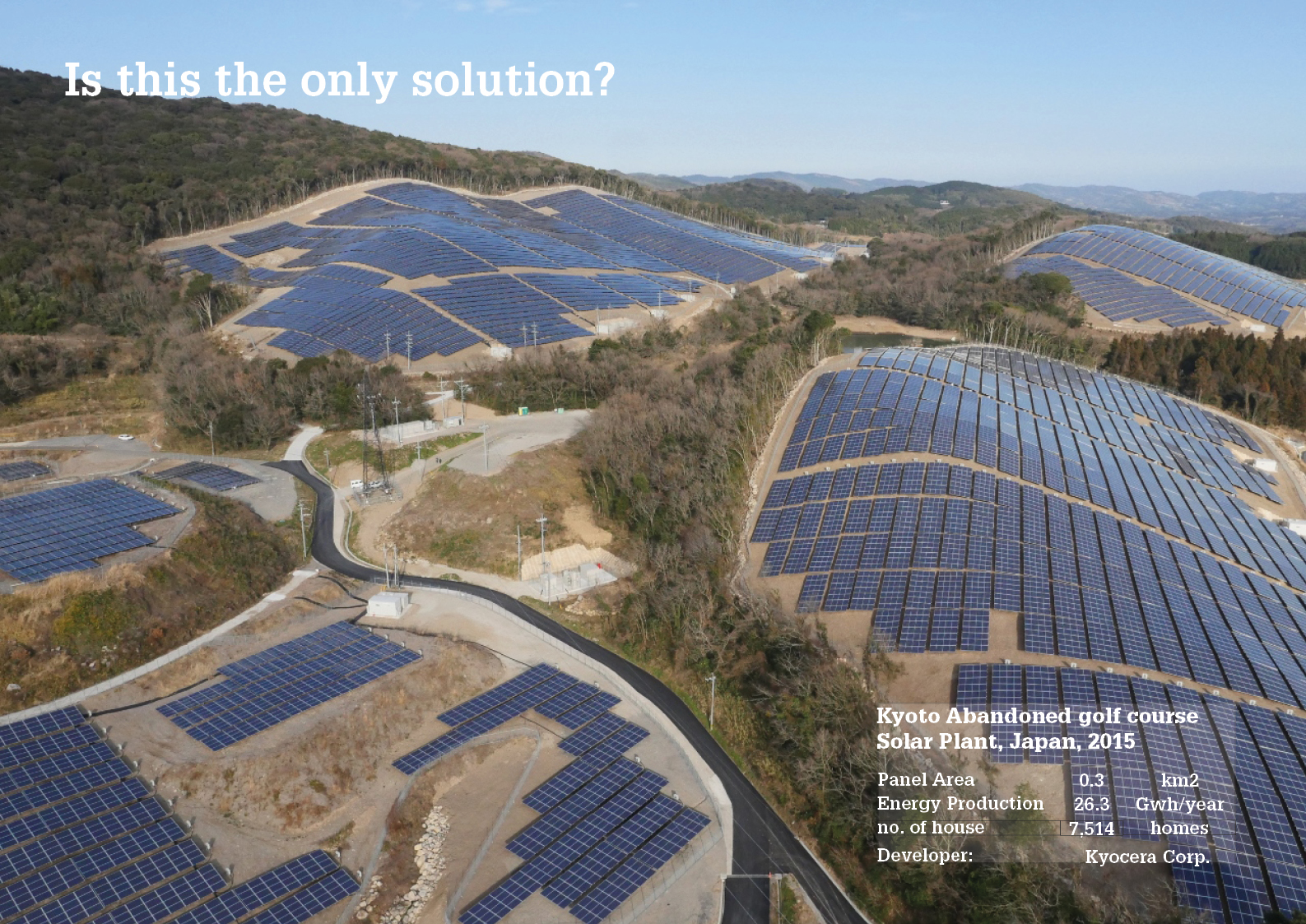 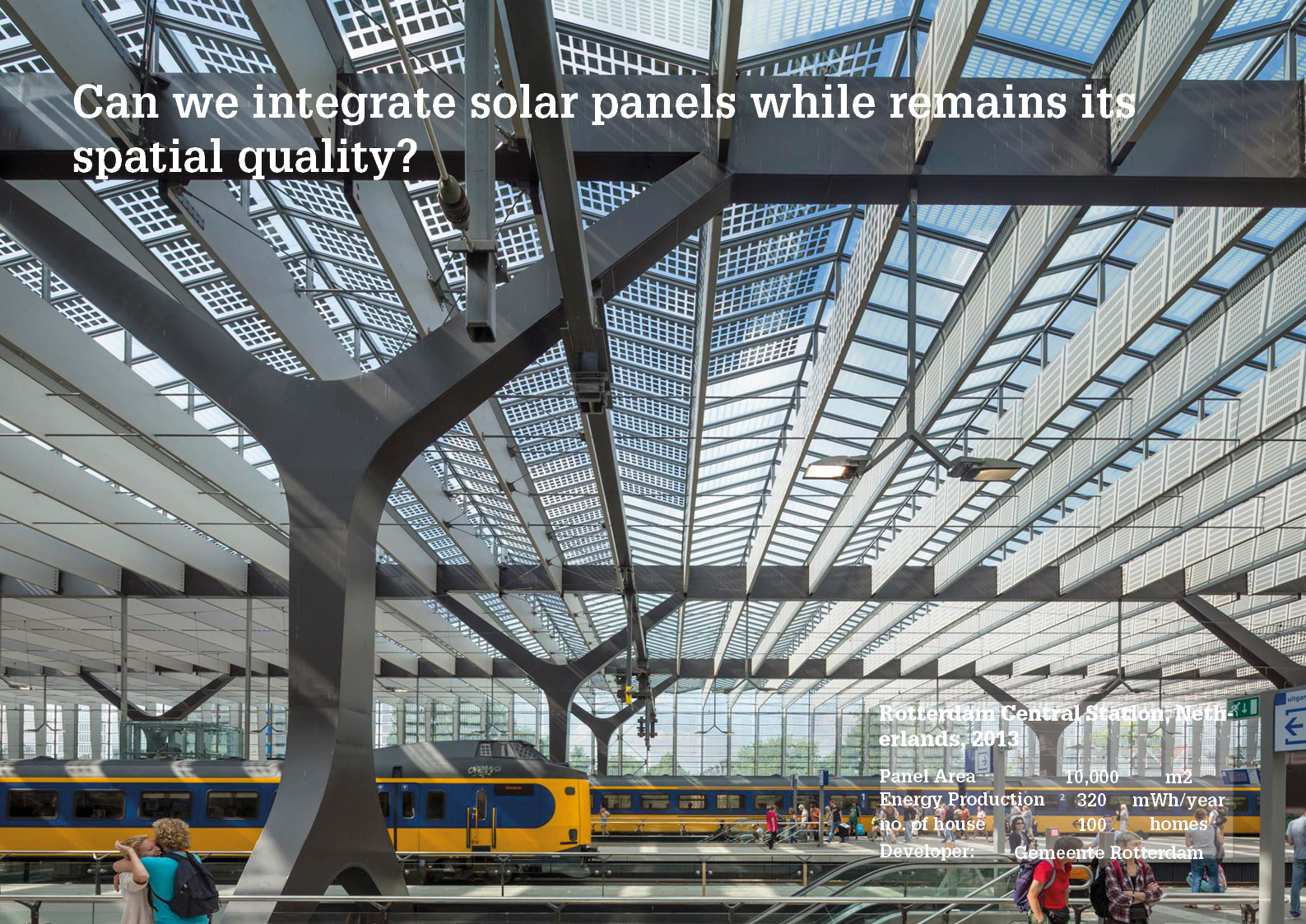 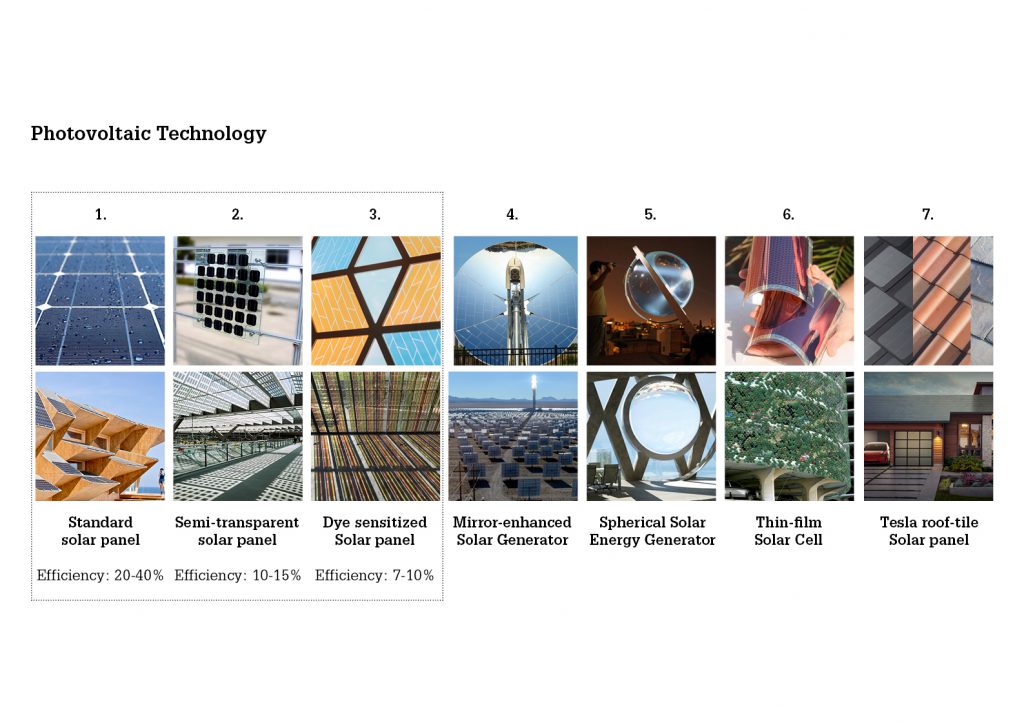 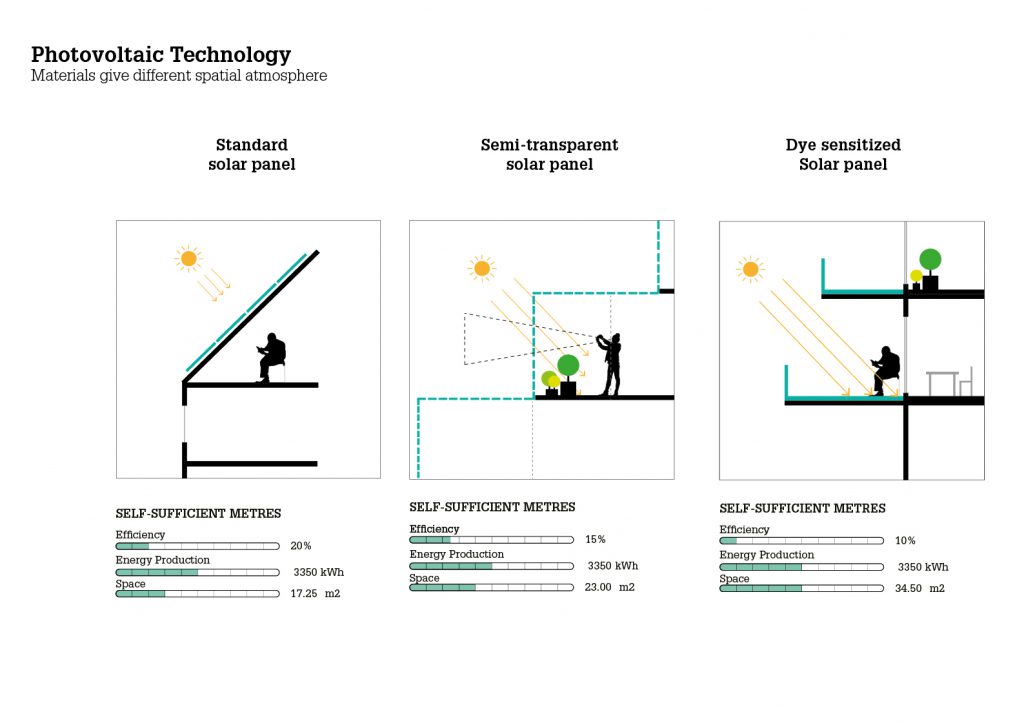 The individual project starts with the proposed speculation “What if I would live self-sufficiently in a solar panel block?” The question is how much solar panel a house would require and how much space they will occupy. Moreover, the goal of the project to densify the block while remains self-sufficient. To analyses the amount of solar radiation the block received. After analysing the amount of solar radiation received, one could calculate the electricity production and the amount of people in the block.

With the constant progress development of photovoltaics technology, the efficiency of solar panels has been improved. Through this improvement, the hypothesis of living in a zero-energy
building with clean alternative energy could be achieved. However, the current approach to harvesting solar energy is to build a large solar farm where the aesthetic of solar panels is detached from the urban environment.

The project investigates the notion of the self-sufficient condition, by harvesting solar energy for inhabitants’ electrical consumption, where a city would live independently from the local power grid. The thesis explores the potential and aesthetic of building-integrated photovoltaics in a high-density residential block. 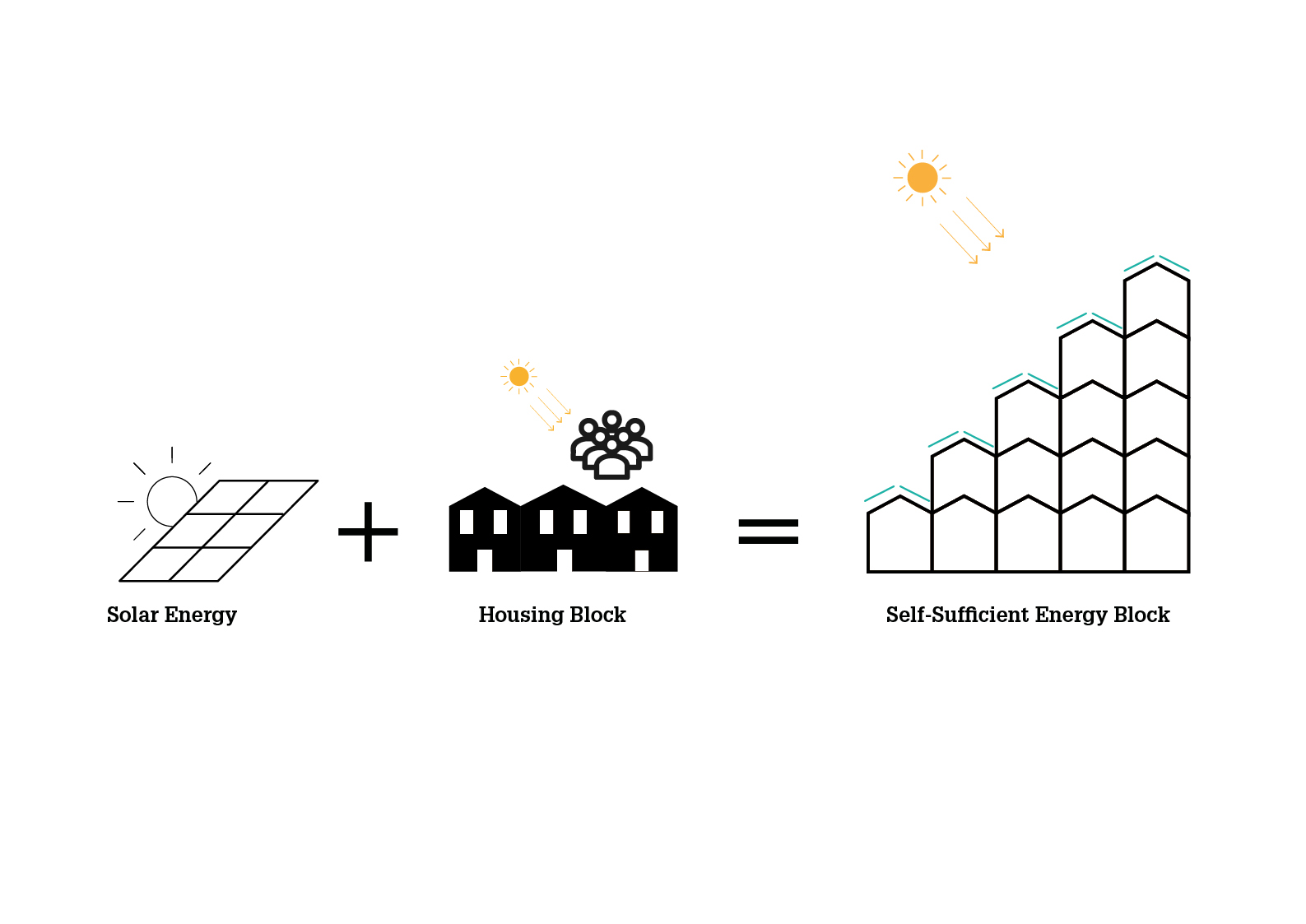 Imagine living in a city block where you can sustain your energy usage and not rely on the local electricity grid. And still, live comfortably with good daylight quality.

Imagine living in a city block where you can sustain your energy usage and not rely on the local electricity grid. And still, live comfortably with good daylight quality. 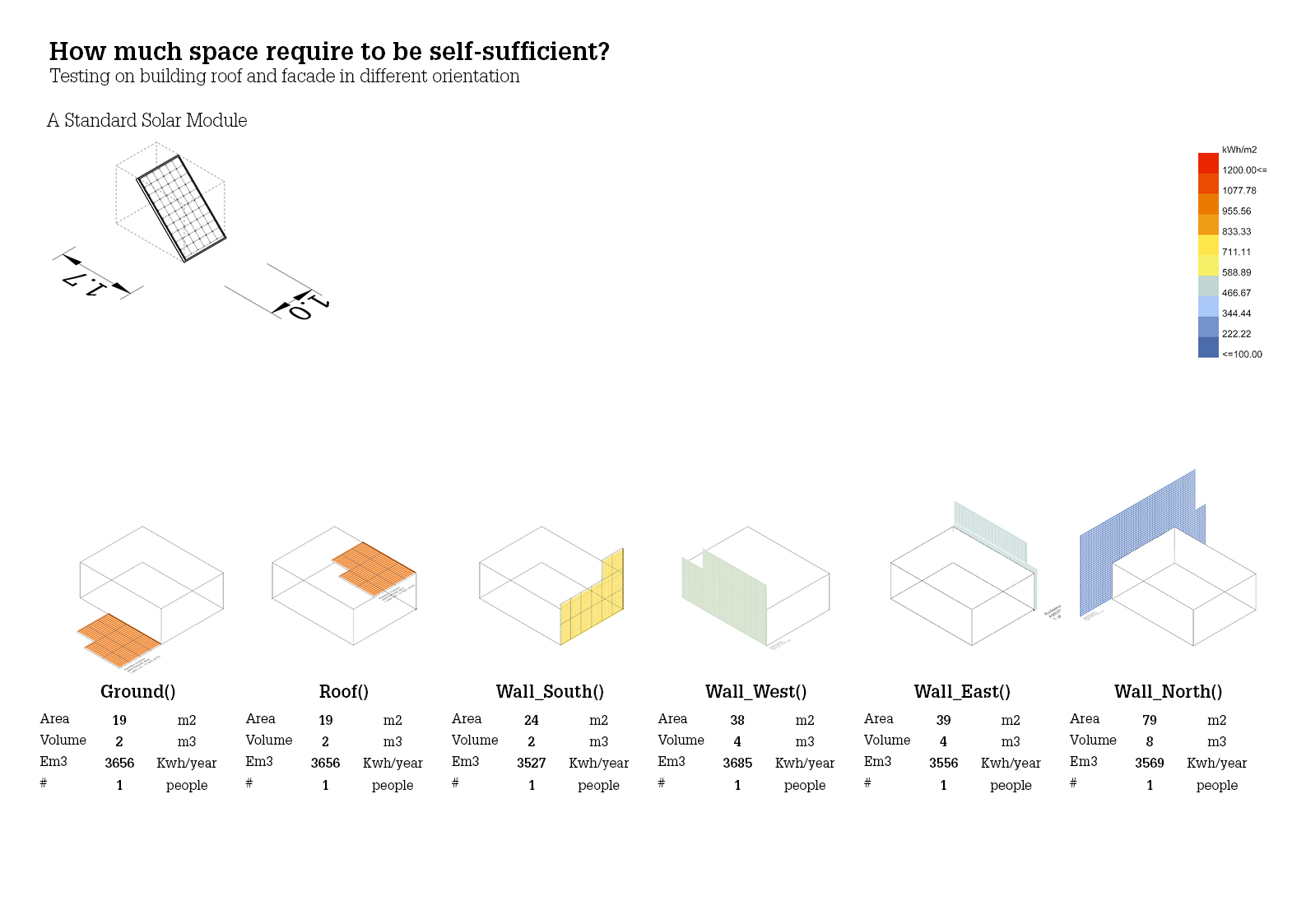 How much space it would require to be self-sufficient with Solar Energy?

Generating and storing energy require space. The question is how much space requires for one person with 48 m2 home to run self-sufficient solar power.

For 1 person to live self-sufficiently would require:

= 3,350 kWh per year per capita (world average domestic electricity use)

This simple calculation will be the basis to develop further to the housing block. How to reconfigure space to maximise the surface area of the block for energy harvesting? How many houses can be built in this block? How to densified the block while maintaining the self-sufficient condition and dwelling quality?

Applying the blockmaker framework, the software can import city data references to construct a site boundary for any project. The data would include the plot size, street width, FAR and weather data.For this research, the location is set in Barcelona, Spain with a research boundary of 100 by 100 by 100 meters. Within this given footprint of 10,000 m2, the essential problem is to a suitable amount of programs between housing quality and energy production.

After constructing a block boundary, one would be able to assign programs relative to its FAR and amount of users, which will base on different scenario one would apply. In this case, the program goal is to be self-sufficient with solar energy for 443 inhabitants.

Mass Transformation I
is an initial study to understand the relationship between mass volume and surface area of solar panels to meet the self-sufficient energy condition. All the mass will have the same volume, by transforming the geometries, each mass produces a different amount of electricity. 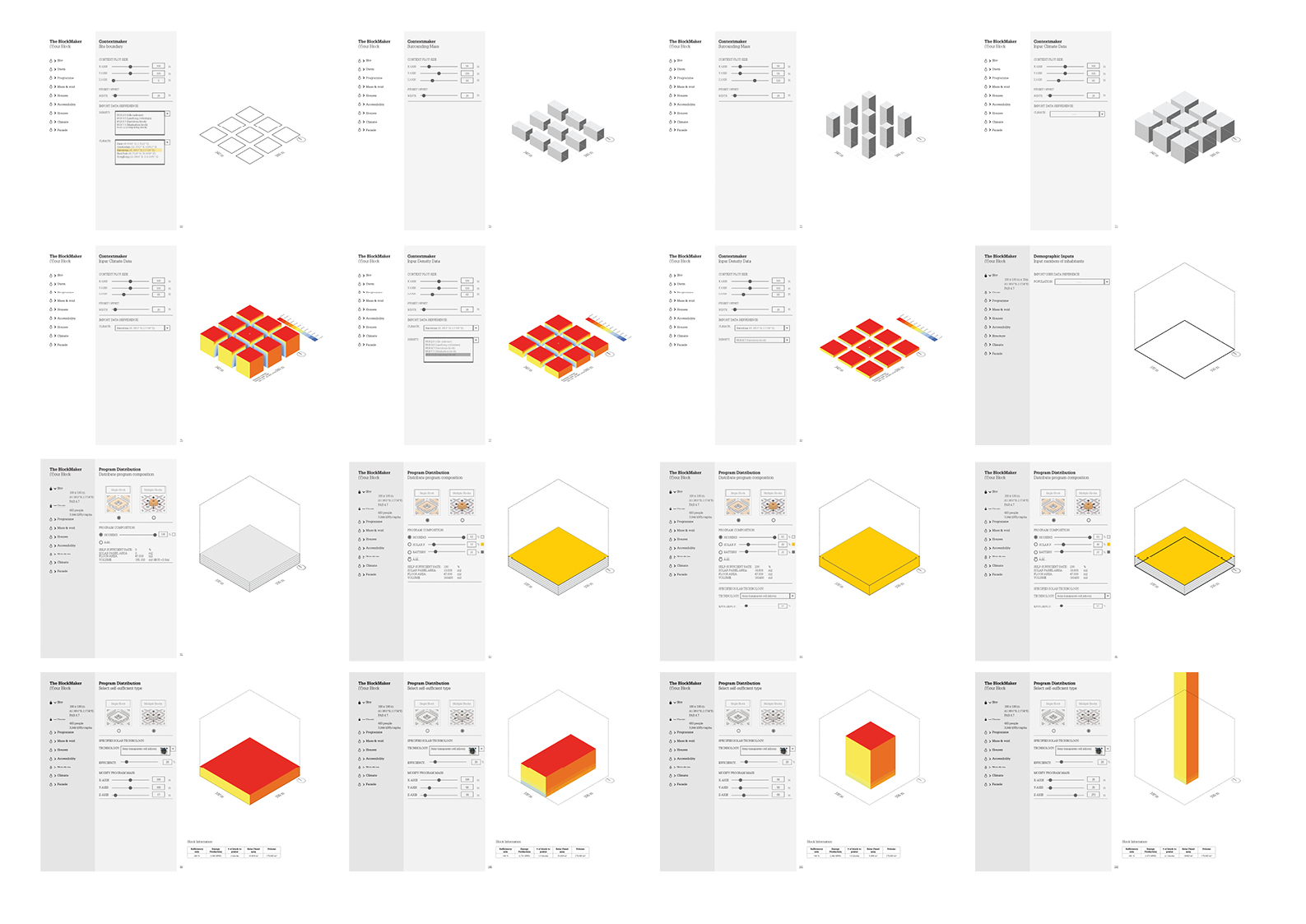 Setting up context and density parameter 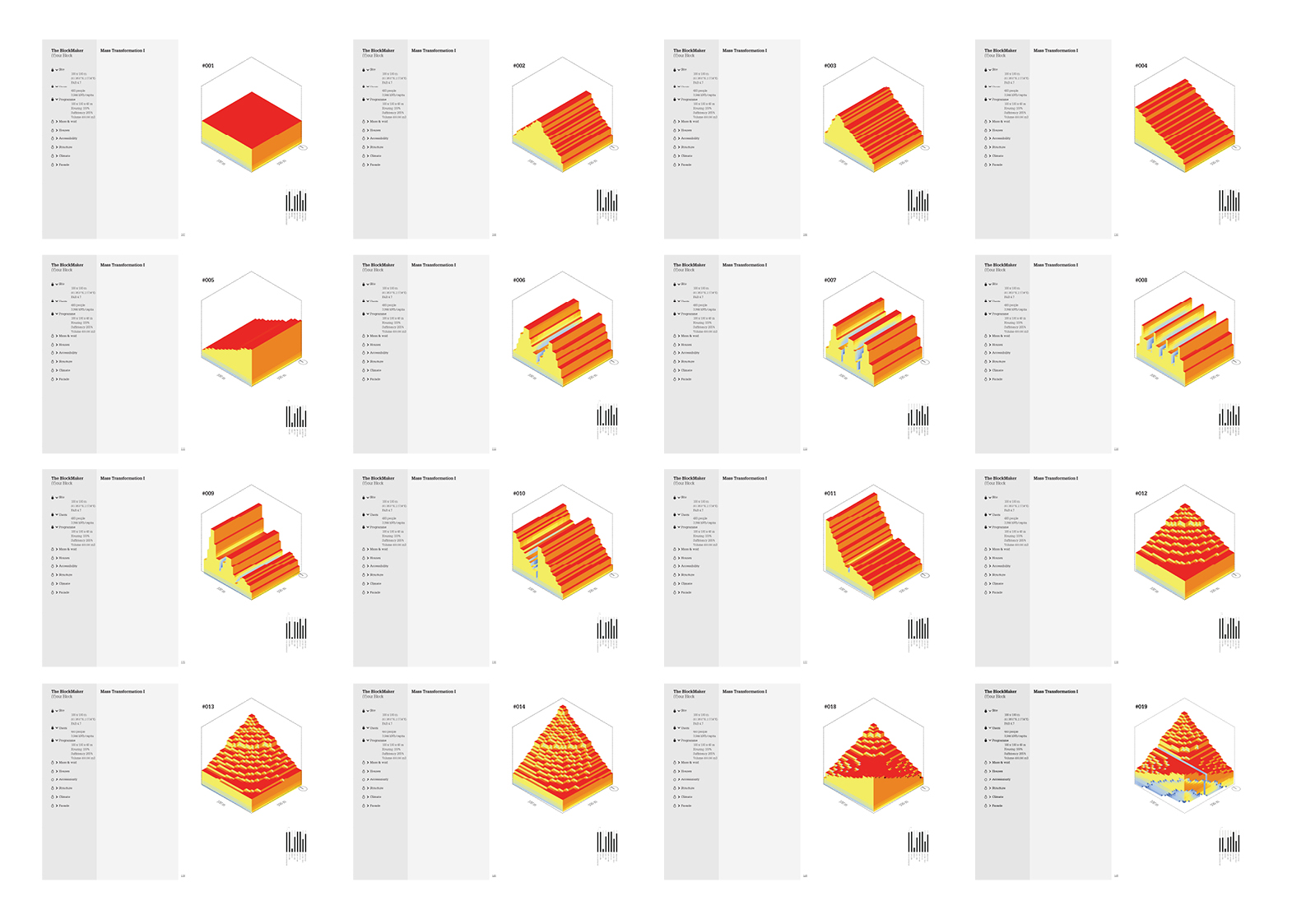 The design methodology of the studio is to create a series of iterations that would yield the different possibilities of design outcomes. 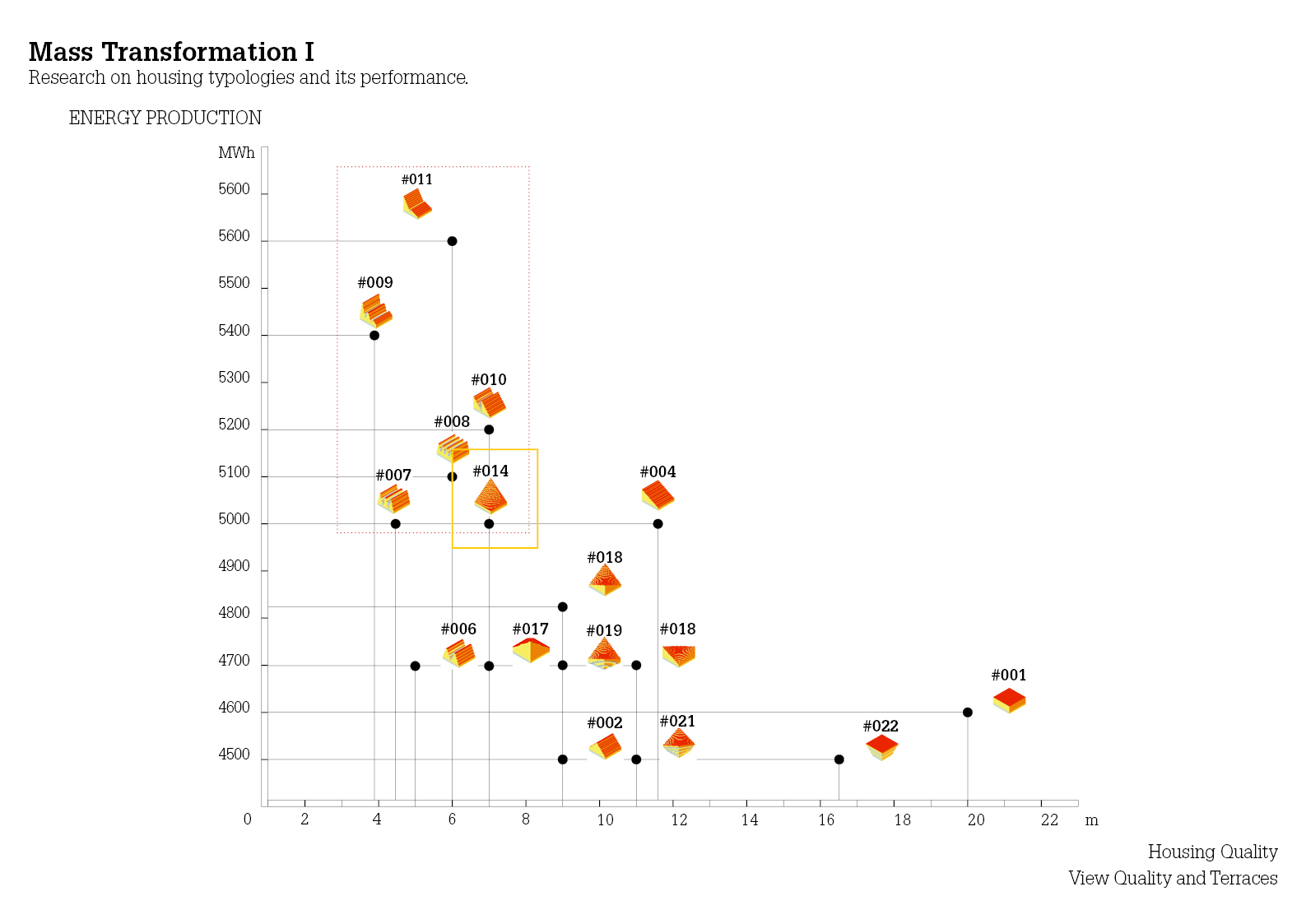 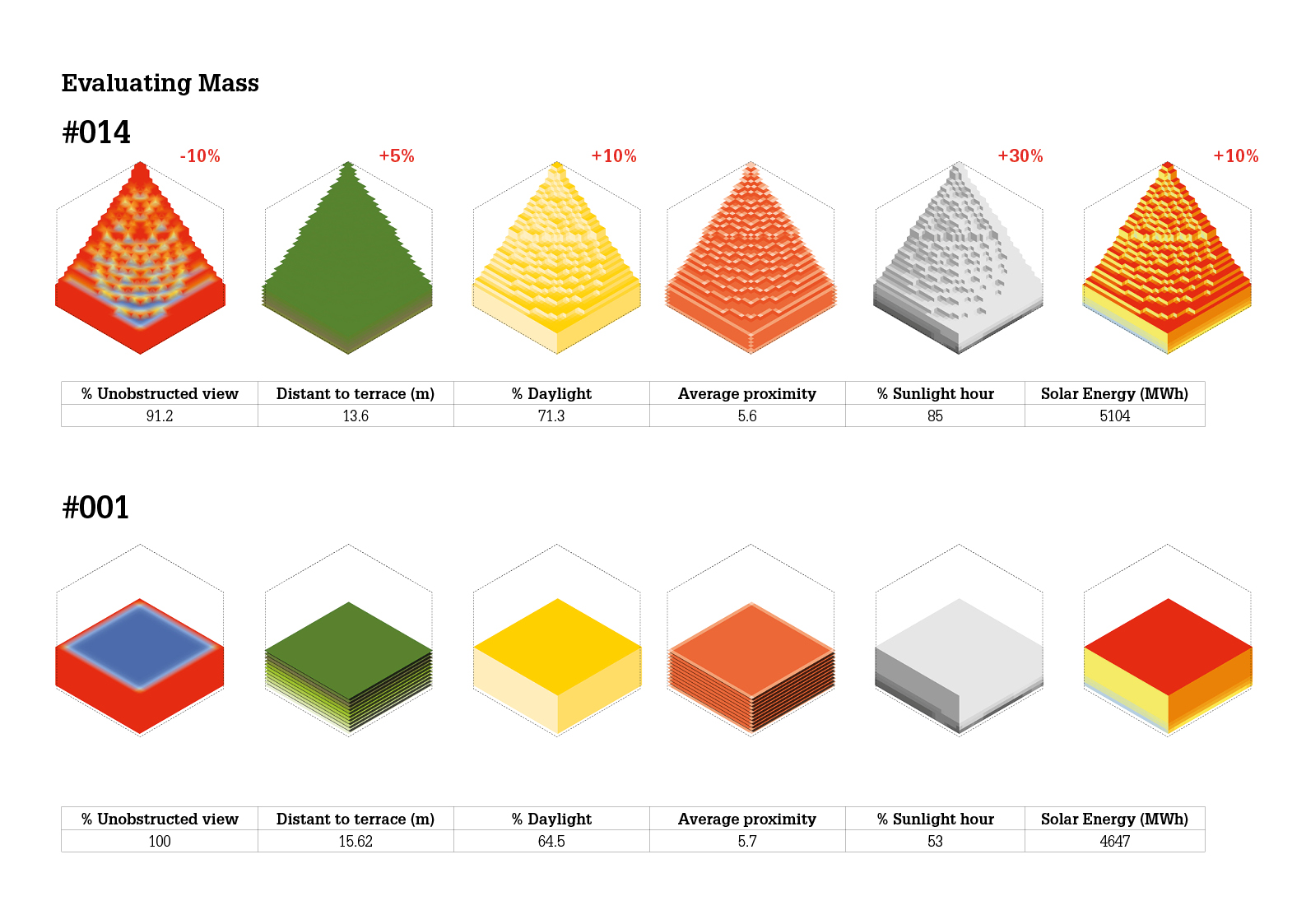 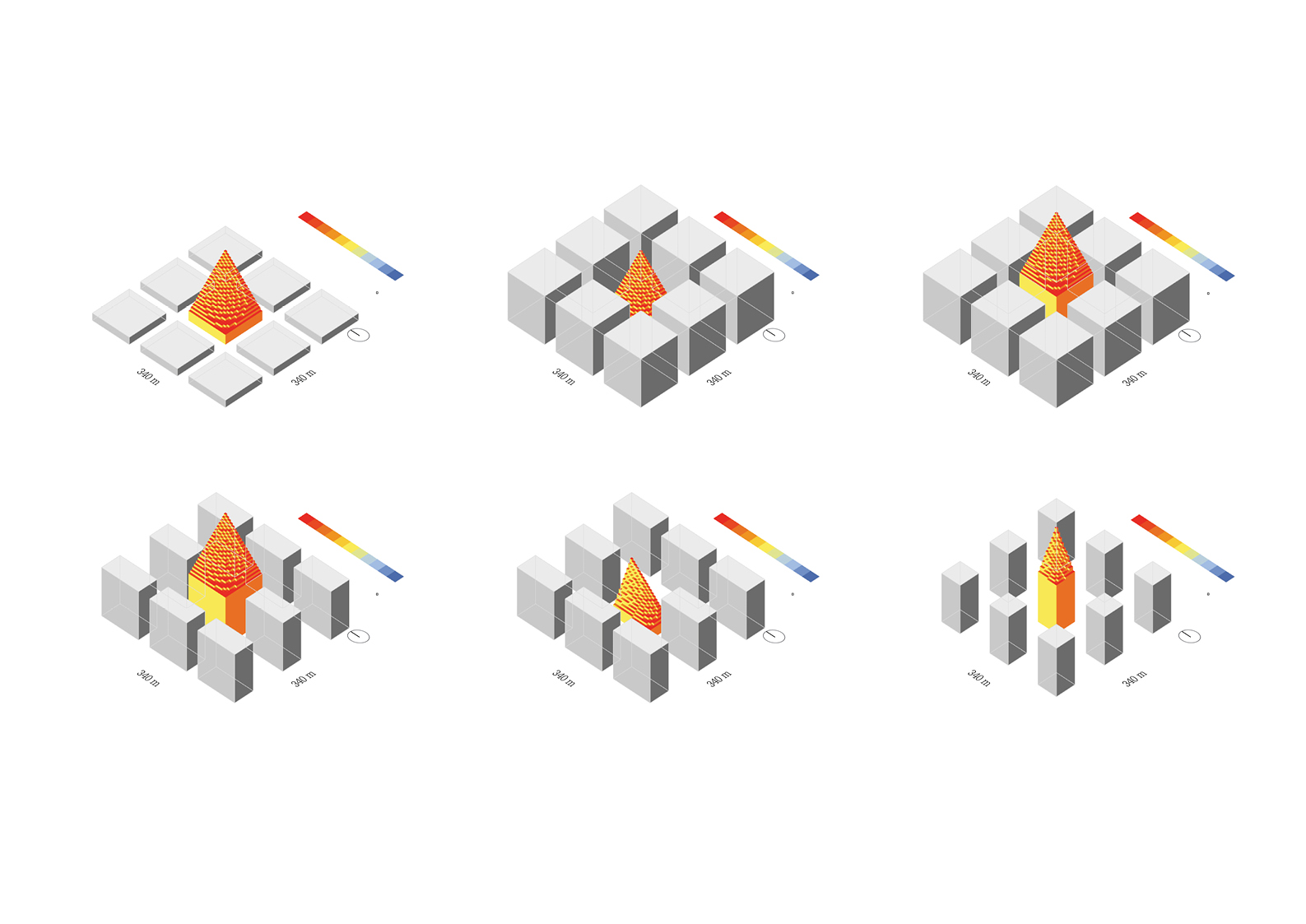 The evaluation of each mass become a vital process to observe the performances of mass transformations. By plotting each mass into a graph, allowing one to select a potential mass to develop further.

This methodology has constructed a critical framework working on this project. The process of iterations might occur in a loop of various modifications before the design execution.

Therefore, in this research after the first mass evaluation the design went to another round of ‘Mass transformation’ and ‘Mass evaluation’ where the goal was set to improve the housing qualities for the mass. 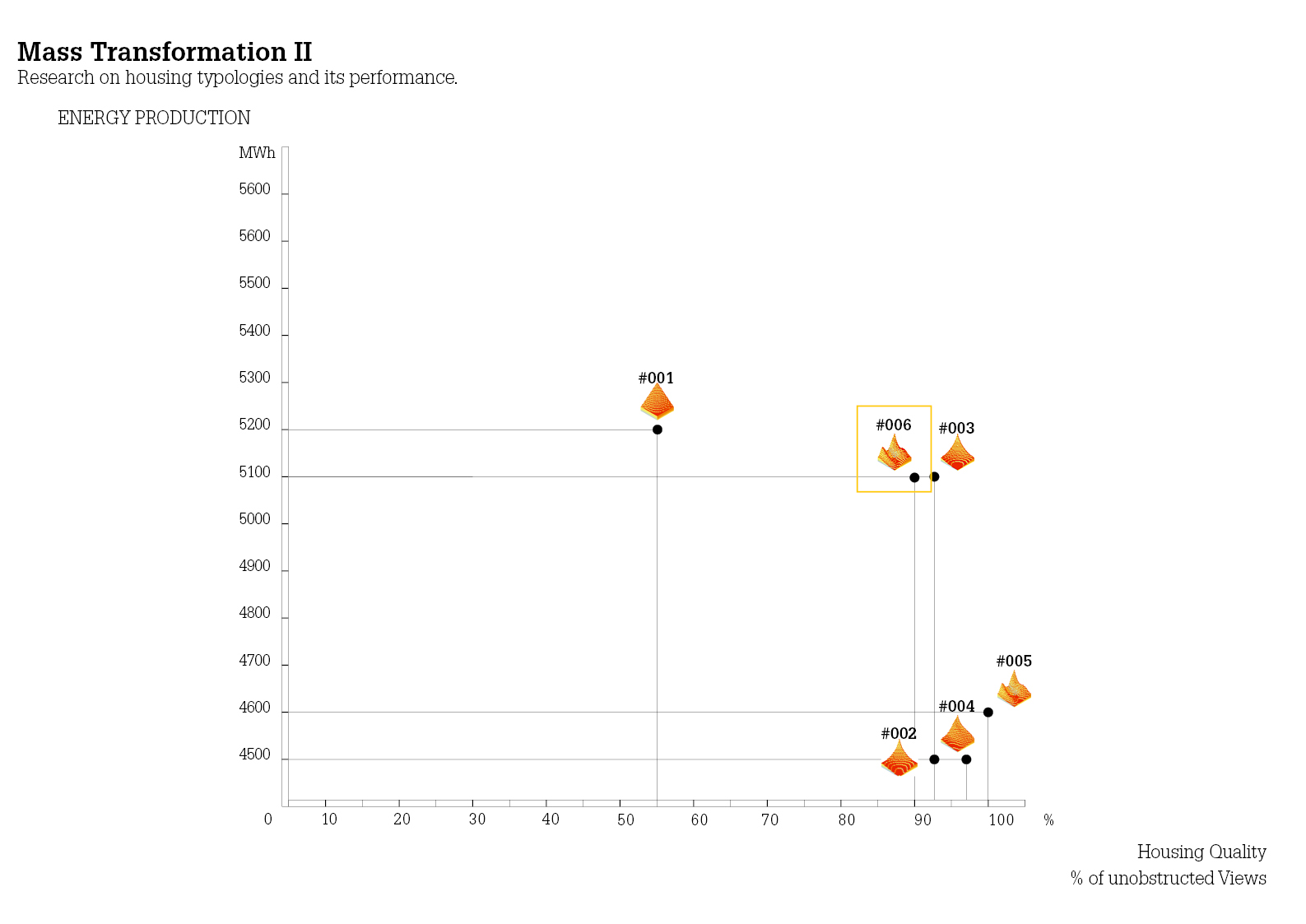 Mass Transformation II was my second exploration into the Blockmaker and how to create a design system that allows the potential to adjust its form according to different parameters such as density, energy, housing qualities

This process is after mass transformation to divide mass for housing typologies and organise the circulation of the building. The logic of the organisation has followed the concept of maximising the amount of daylight hours for housing quality and energy production.

Considering the orientation of the block: North-South, East and West, the length and the height of the housing units were established accordingly to the average sun angle in three seasons: Summer, Autumn and Winter. The lowest sun angle is used to determine the depth of the room, in this way the entire room will ensure to receive daylight in the evening.

After the dimension of the housing units in different orientations where determined, the circulation and services are located and placed in the North where the block received less sunlight through the day.

From the floorplan, one can see that the corridor is pushing to the exterior of the North direction and the rooms would receive daylight through the day. 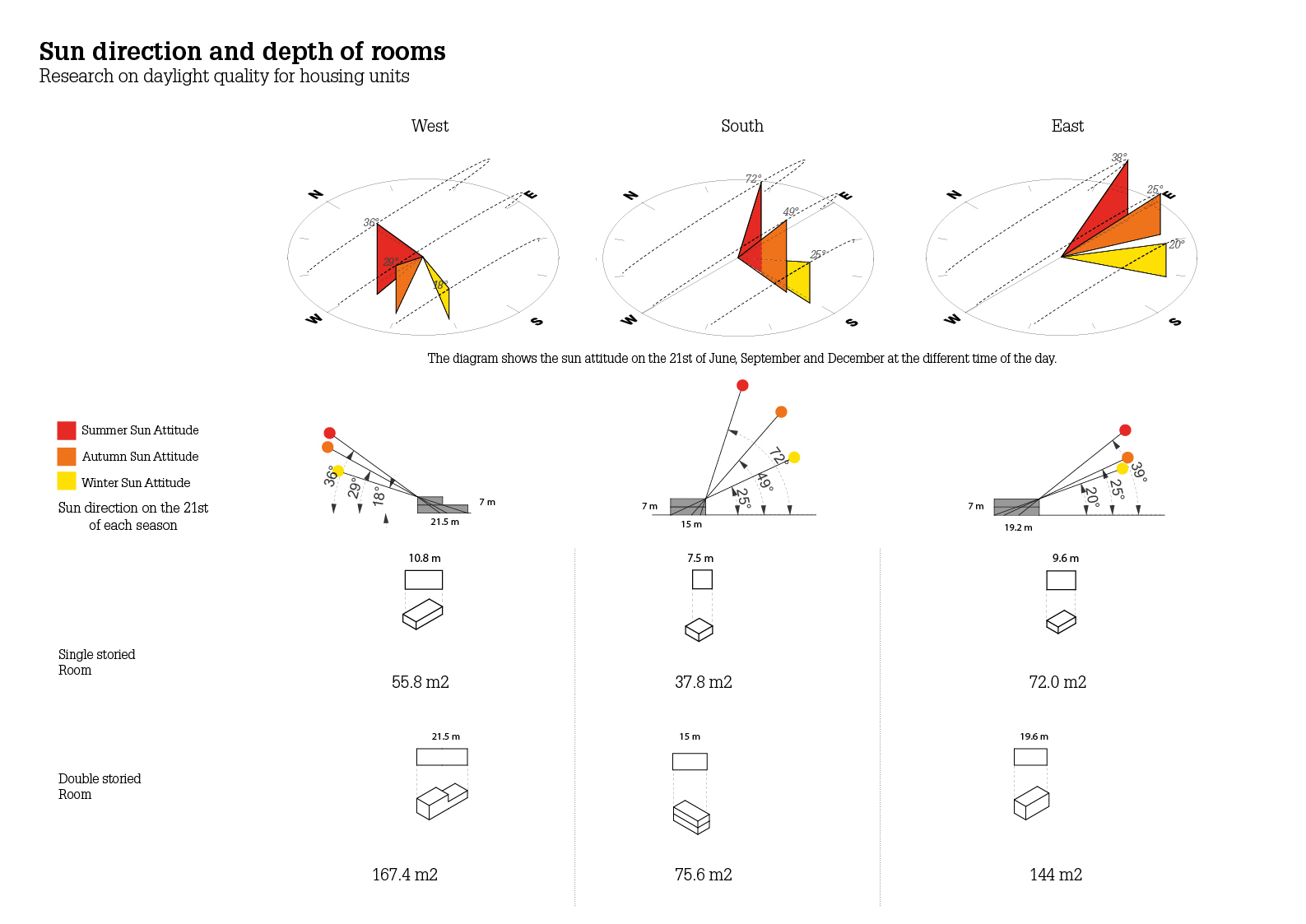 diagram explain the analysis of the average sun angle through three seasons in relation to the housing unitsdimension. 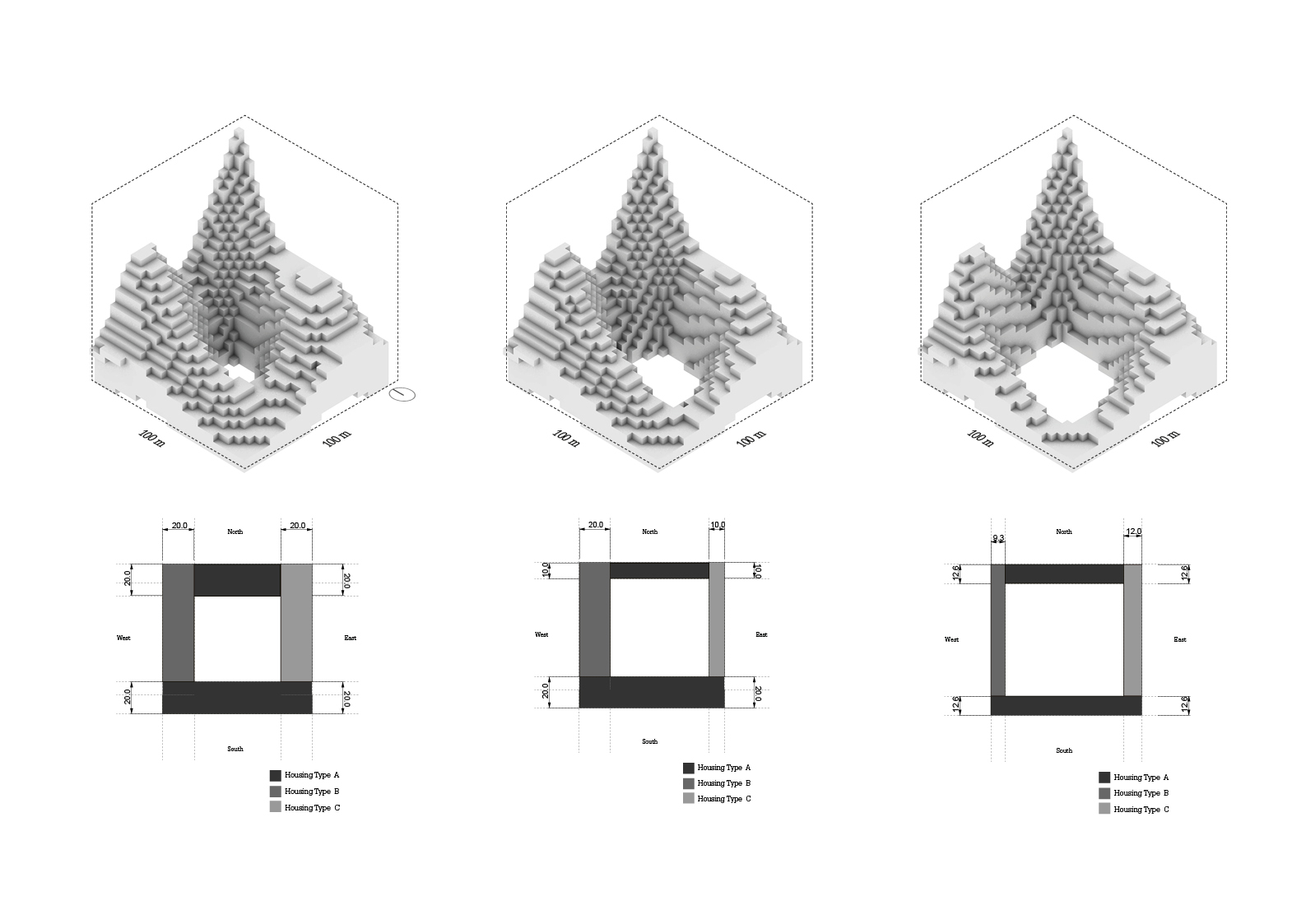 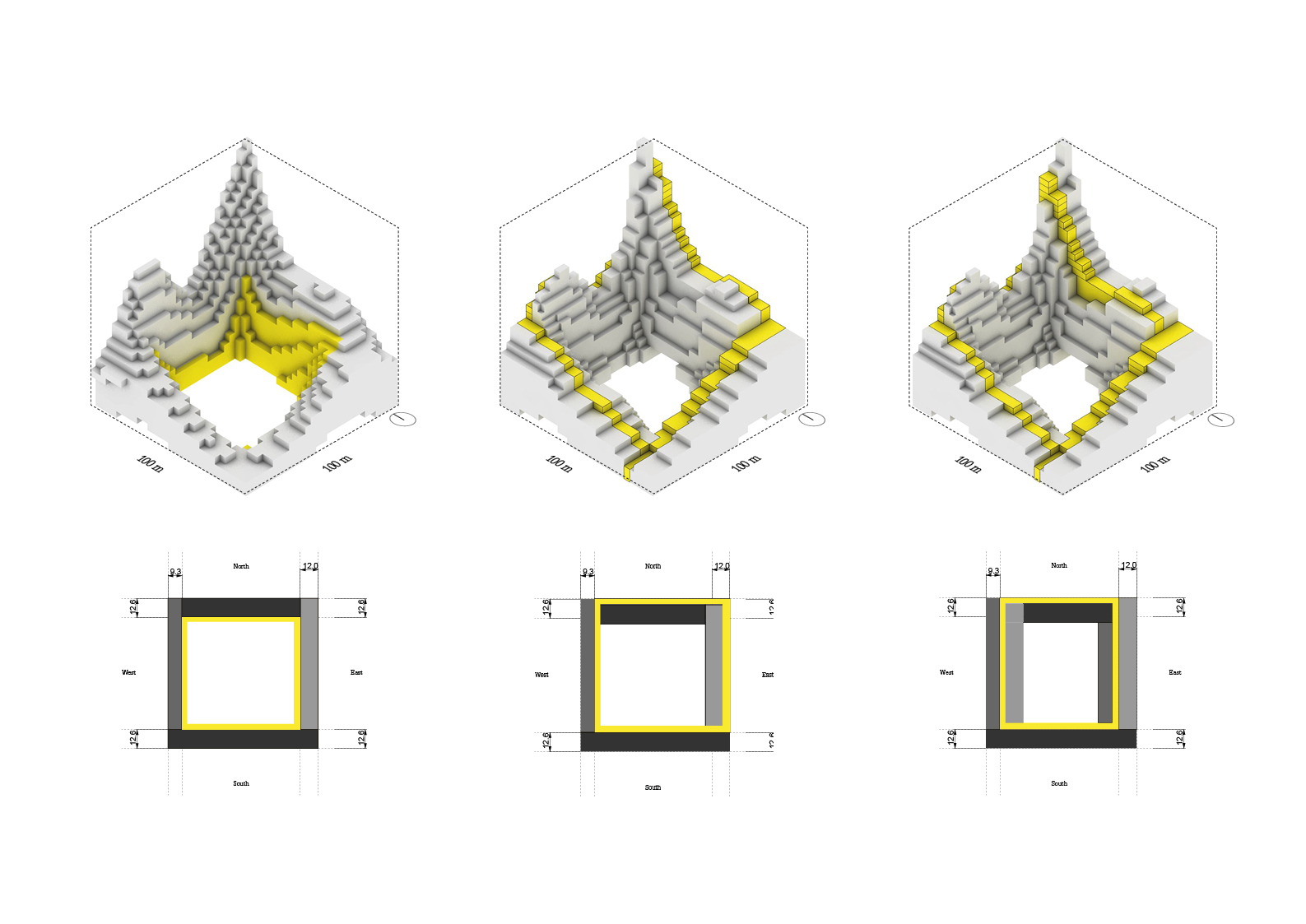 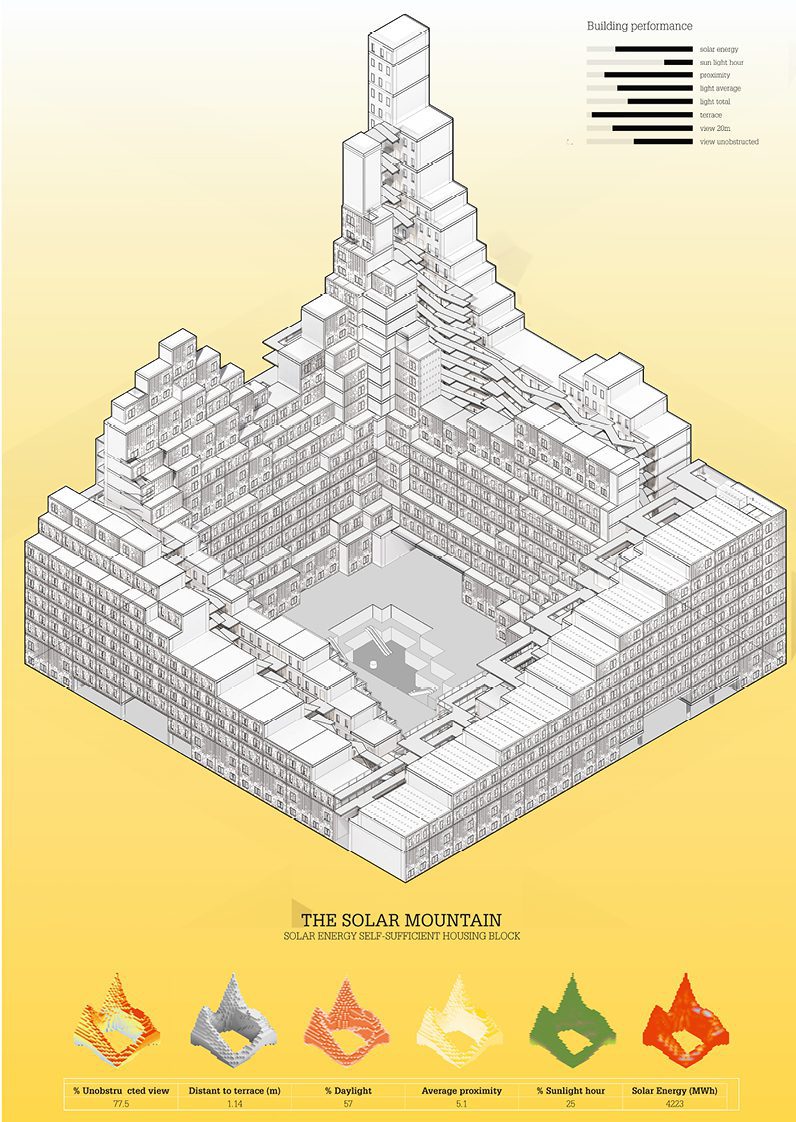 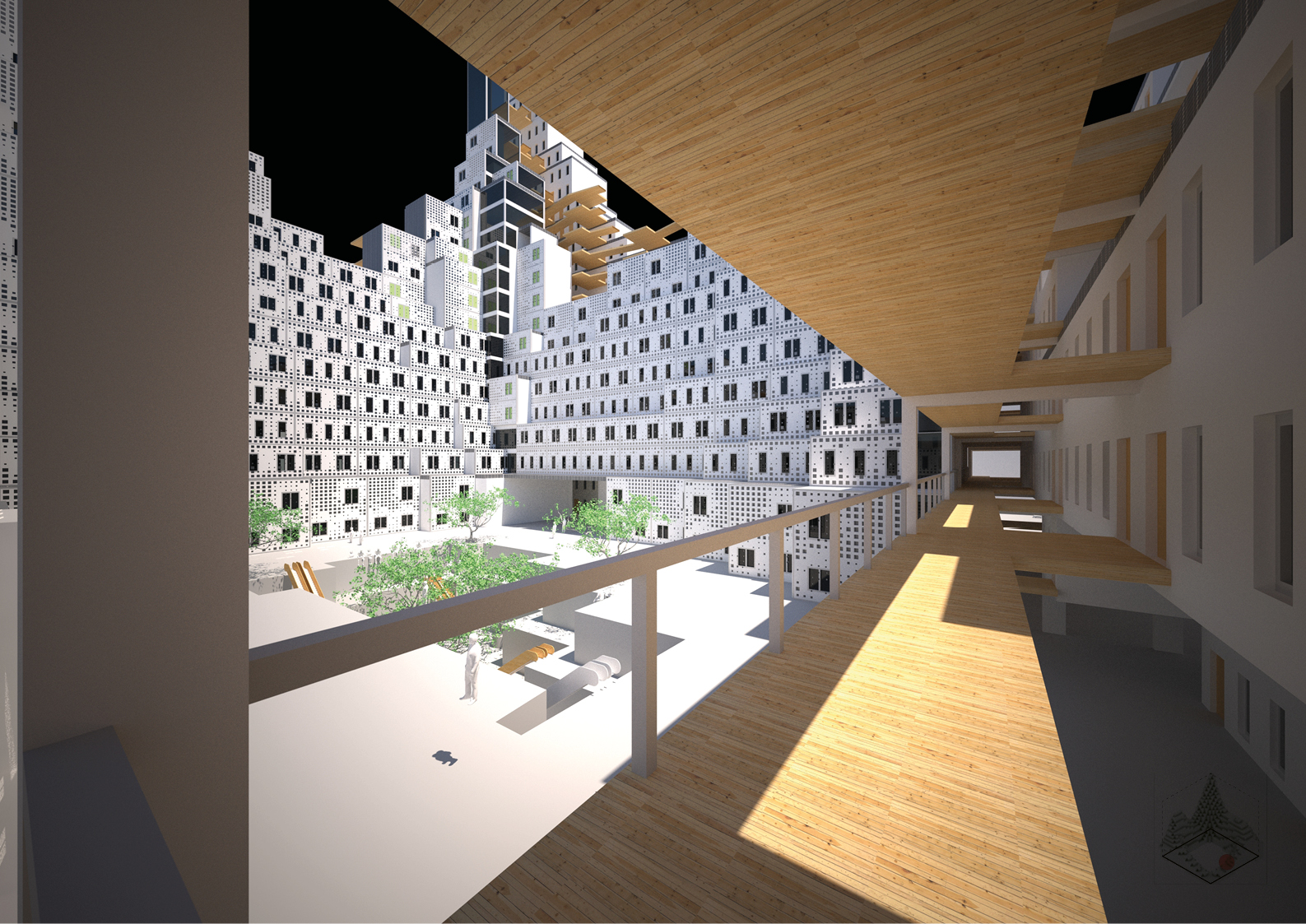 The mass-selected for the projects is just one of the many alternative options, that has frozen in time. The framework of the software is the key research topic which still requires time to investigate, especially the relationship between housing qualities, energy production and density of the block. 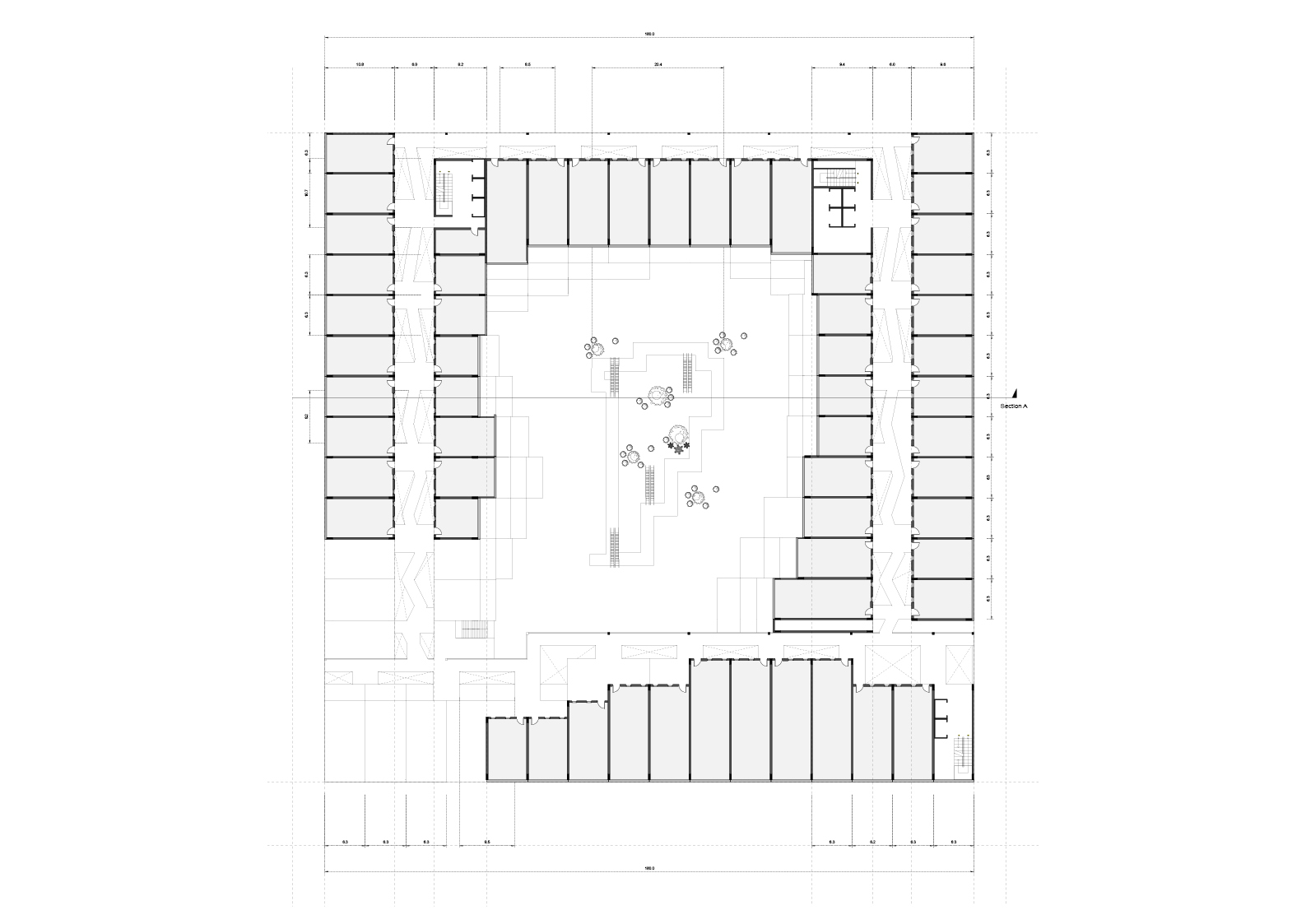 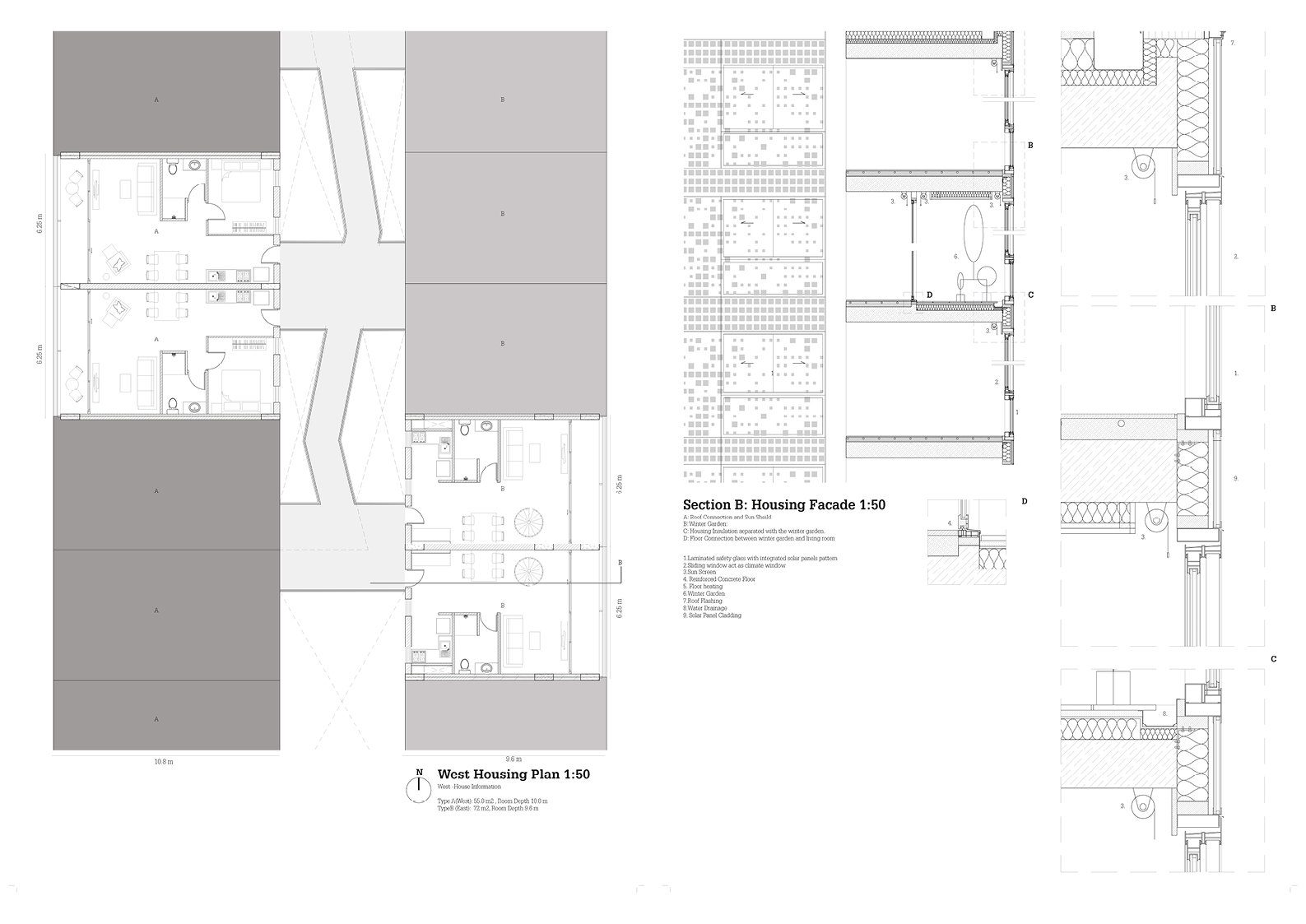 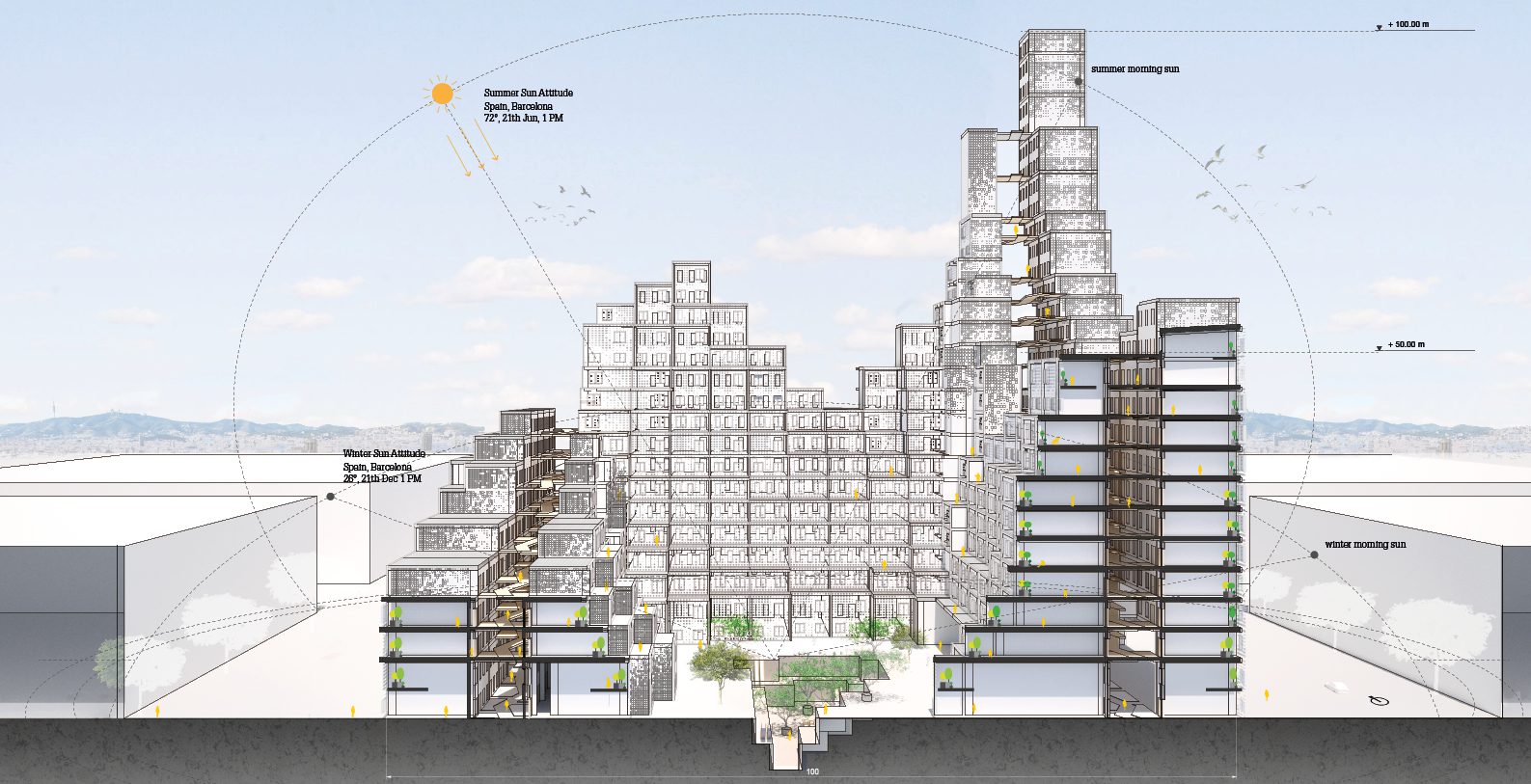