ฉันจะไปดูตึก —
“I am going to see building”

ฉันจะไปดูตึก —
“I am going to see building”

Just what is it that makes contemporary travel so different? So appealing? ไปดูตึกทำไม ? "I'm going to see a building"

is a familiar phrase that you might have heard often if you are friends with architects. You might be wondering with questions like “Why do you want to go see a building?” What will you learn from it? Going to see buildings, it could be just visiting shopping malls, corporate offices and headquarters or someone’s houses in a foreign country.

Actually, if we think carefully, going to see buildings is not so different from visiting city landmarks, hiking in the wilderness or visiting famous restaurants. All of these choices are looking for new experiences in places that we are not familiar with. So, just what is it that makes architects travel so different? Well, perhaps one simple word that could explain the passion for architecture tourism is “space”. It is a spatial experience of a place that motivates architects to keep travelling space is the relationship between masses; it is an interaction between geometries, light and shadow. Placing two six-metre boxes together with a distance apart of two-meter, and imagining yourself here in the centre of the gap looking up to the sky, experiencing the invisible volumetric void between those boxes, that is a spatial quality. Proportion, size, height, materiality and structure are key elements in determining different spatial beauty.

In the era of globalization, one can find inspiration by just browsing on the internet in a cafe, but the physical experience of visiting architecture remains vitally important to architects. It is a way to observe and explore other architects’ works through our sensory experience. The perceptual attributes of space interacting with light, shadow, reflection, colour and material triggered our senses. The more we travel, the more the archive of our visual and sensorial memory grows. This archive could be considered as a toolbox that architects could use to refer later on in their practice. 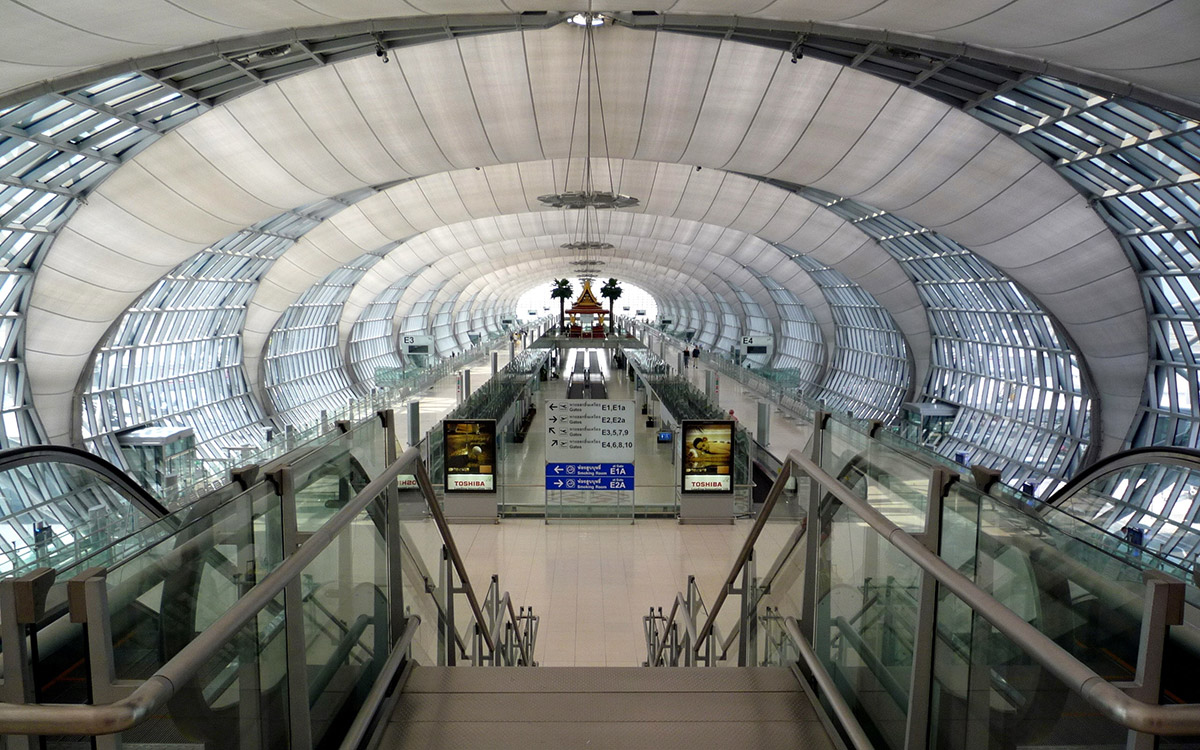 Travel is a simple word but has complex issues that follow. It involves many industries and parties from public sectors, government agencies, political policy to private sectors, hotel operators, offices, retails and even the “app store”. To get from destination A to B is a result of travel but the act of travel actually, happens in-between those destinations or even before, which involves planning, booking and packing. Travel might conjure up many memories associated with one’s travelling experience, a journey in a crowded airport passing through layers of security procedures or a road trip through multiple stops along the route.

Travel and tourism have tremendous effects on the cities we live in. The infrastructure has been constructed for tourist transportation to facilitate people with different travel agenda and manoeuvre people from one point to another. It redefines places from neighbourhoods to regional scale. The common infrastructure of many tourist attractions is fencing and signage. They were put in place to control tourist circulation as well as giving out information and advertisement. These small interventions already have affected the atmosphere of the place. Olympics is a large scale urban intervention that rapidly transforms the city. The event has become part of the urban renovation and development to promote cities wealth and power. It took five years to completed Beijing National Stadium, the Bird Nest, and its surrounding area, which abruptly transformed for the Olympics in 2008. The design was led by Swiss architect, Herzog & de Meuron. The stadium was held for opening and closing ceremony as well as sports games. Surely, the recognizable image of the stadium at the grand opening ceremony, which was broadcasted worldwide, has become a collective memory associated with the architecture. The memory of the glory past prolonged till today, creating a narrative which is imbued in the architecture. 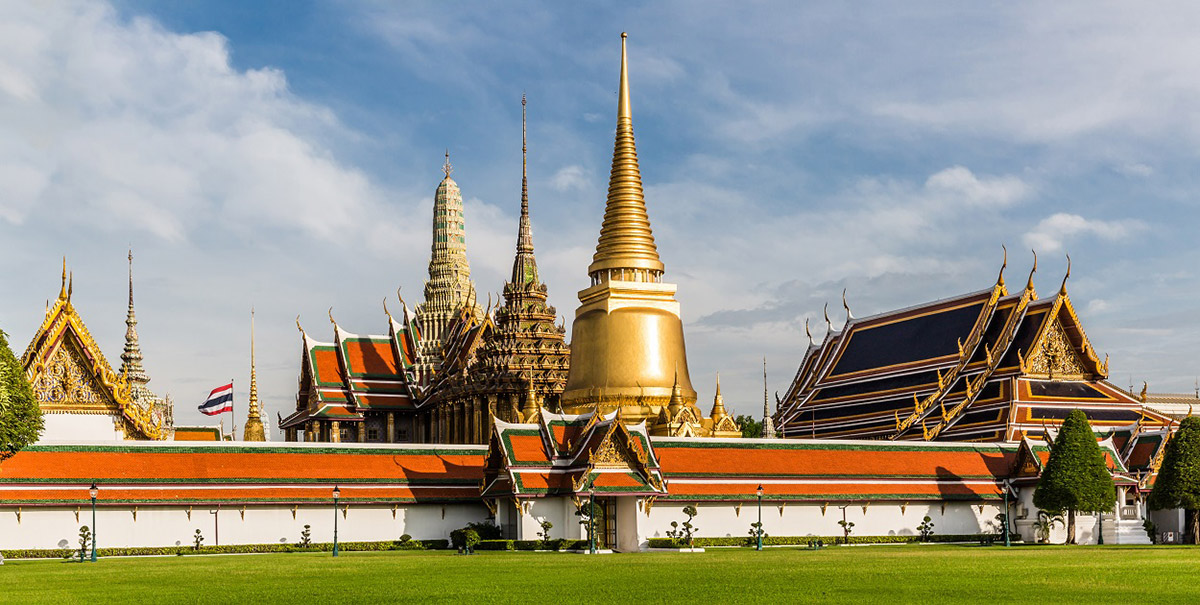 Narrative and national identity give a place its cultural relevance and charm. Both city attractions and contemporary architecture employ narrative to bring authentic quality and cultural value to architecture. Authenticity attracts travellers. Ancient and historical architecture has an exceptionally wonderful quality of authenticity. It is the history that makes them timeless. The monumental qualities in terms of scale, ornamentation and traditional construction techniques and materials, make the historical architecture an exception from modern and contemporary architecture.

One fact concerning historical architecture is that they are increasingly under the state of “preservation”. In other words, architecture as an artefact has been frozen in a specific time period to preserve its heritage value and authenticity. Based on UNESCO, as of July 2019, we have 1,121 World Heritage Site, that is 14% of the Earth’s land surface and 3% of seas and oceans. The implication that came with the announcement of a World heritage site is that the site instantly becomes untouchable. The abrupt change of function and program in a building. Preservation by its definition is to resist evolution. However, on the one hand, by not allowing something to change is against the nature of time, the amount of financial and maintenance support and security required to resist the ageing of buildings has to be invested. Preserving architecture to its glorious past is one of the ways to ensure that the later generation would be able to experience the heritage legacy of the past. The traditional craftsmanship skills and knowledge of renovation could be passed on to the later generation through regular renovation.

One of the well-known tourist attractions in Bangkok is Wat Phra Kaew, also known as the Temple of the Emerald Buddha or locally as Wat Phra Sri Rattana Satsadaram. It was built in King Ram I period The temple was originally built as the compound of the Grand Palace to house the Emerald Buddha, a sacred symbol of Kingdom protection. The temple has undergone several restorations and renovations. The first restoration was in 1831 in the era of King Rama III, to celebrate the 50th year of Rattanakosin Age. After the hundred years had passed to the period of King Rama V, the original state of the monastery went to the regression as the lifespan of the material had reached. Therefore, Wat Phra Kaew went to a major renovation and rebuilt with the enhanced decorations using various exquisite fine arts. The latest major restoration was in King Rama IX era, where Rathanakosin celebrated its 200th anniversary in 1982. It was a state where the wooden structure had decayed. The concrete and stone decay created black stains, decorative ceramic and mirror motifs were falling off. Therefore, the entire area of the temple was in a complete restoration by the field of experts, from structures, facades, floors, ceilings, walls, windows, and decorative and ornamental throughout the area.

Once the place was a private Royal monastery that prohibited accessibility. Wat Phra Kaew went through multiple restorations from the original state from 1831 to today. The original version depicted today portrays the Thai traditional craftsmanship that has been passed on for many generations. The memory of a place was preserved through many important national events dedicated to the architecture, which in turn has given the narrative and value to the temple. In architecture, authenticity tends to characterise the relationship between the originality and local tradition on a specific site. As one of the American historians, David Lowenthal said ‘ In searching for our heritage we find the past we want to find.’ [1] Sometimes dealing with the notion of heritage does not always rely on the originality only, but to seek for fakeness. The fake or the replica could make us feel more real because they are a tangible simulation — the reconstruction of the originality situated in our contemporary life.

If you have visited Icon Siam, the newly opened mega shopping mall in the centre of Bangkok, you may notice at the ground floor that you have time-travelled back to a hybrid city combining four different cultures and styles from four regions of Thailand: Northern, Central, Northeastern and South region. Sook Siam is experience-driven retail in a generic open floor plan of a shopping mall anchor store. It offers various products and entertainment ranging from culinary, art, handicraft souvenirs, medicine, performing arts and other local products. 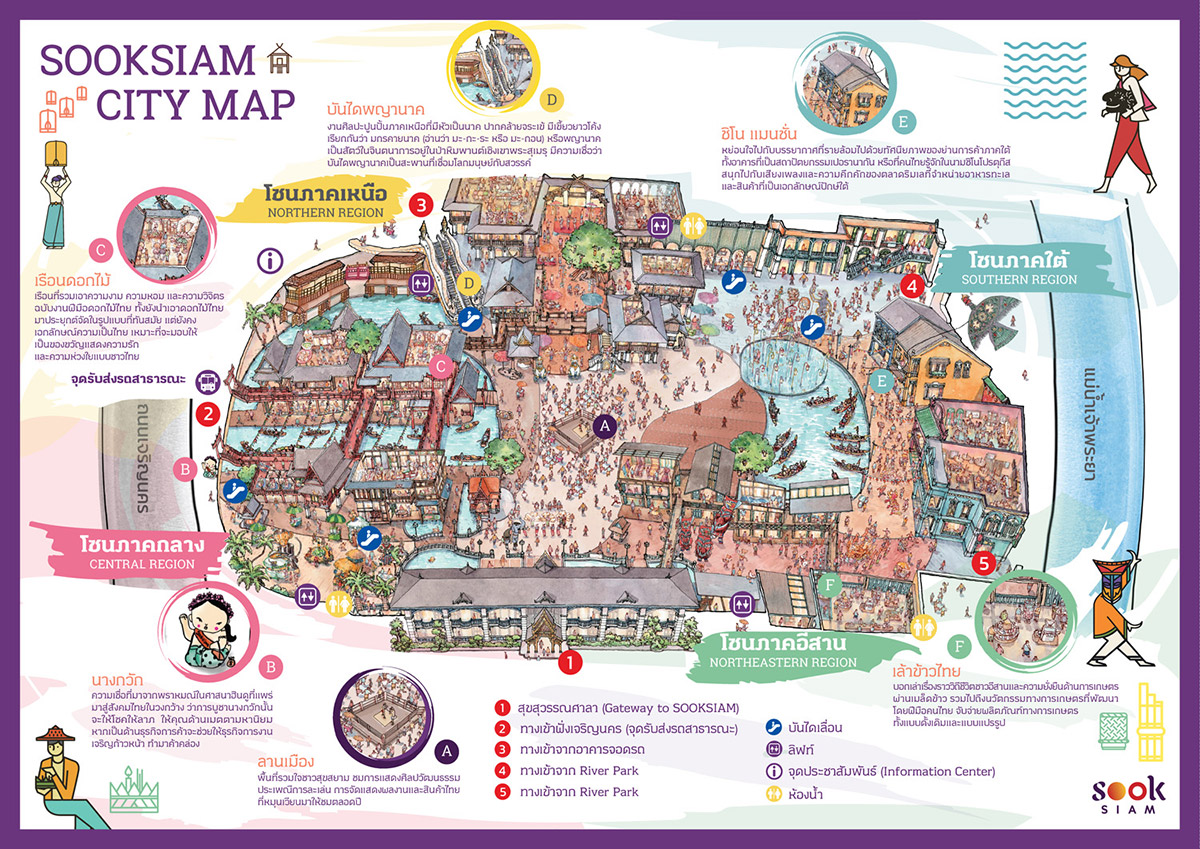 The layout is arranged around a big square at the centre subdivided by artificial streets and canals, separating into 4 zones of the regions. With multiple entrances, one could experience different transitions, depending on where one enters. Entering from the parking lot, one would experience the transition from the modern world to the past. While entering from the main street, one would face with a pavilion that acts as a city gate. The architecture of Sook Saim uses traditional vernacular styles of different regions representing by the use of architectural structures and materials, decorations, and colours. Many of the elements that we usually see in a typical shopping mall have transformed and merged with Thai cultures, such as the mythical serpent escalator which we would normally see it at a Thai temple.

Migrated architecture style from four regions merged together in a single roof may not generate the sense of authenticity in the level of the originals. In some way, Sook Siam is like a movie set where architecture plays a role in challenging reality, creating the extended version of an unreal city. The replica of architecture reconstructed through visual and textual narrative produced as a marketing strategy for a shopping mall surely attracts both travellers and locals alike to the place. 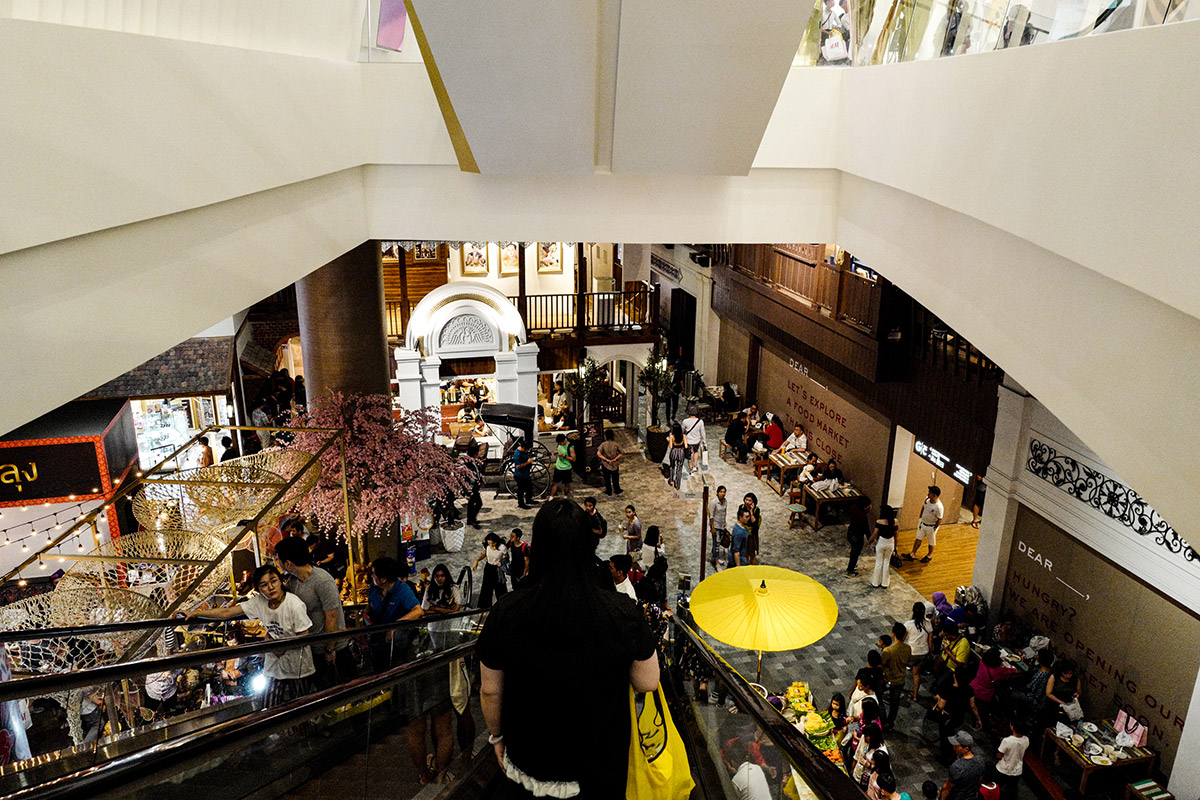 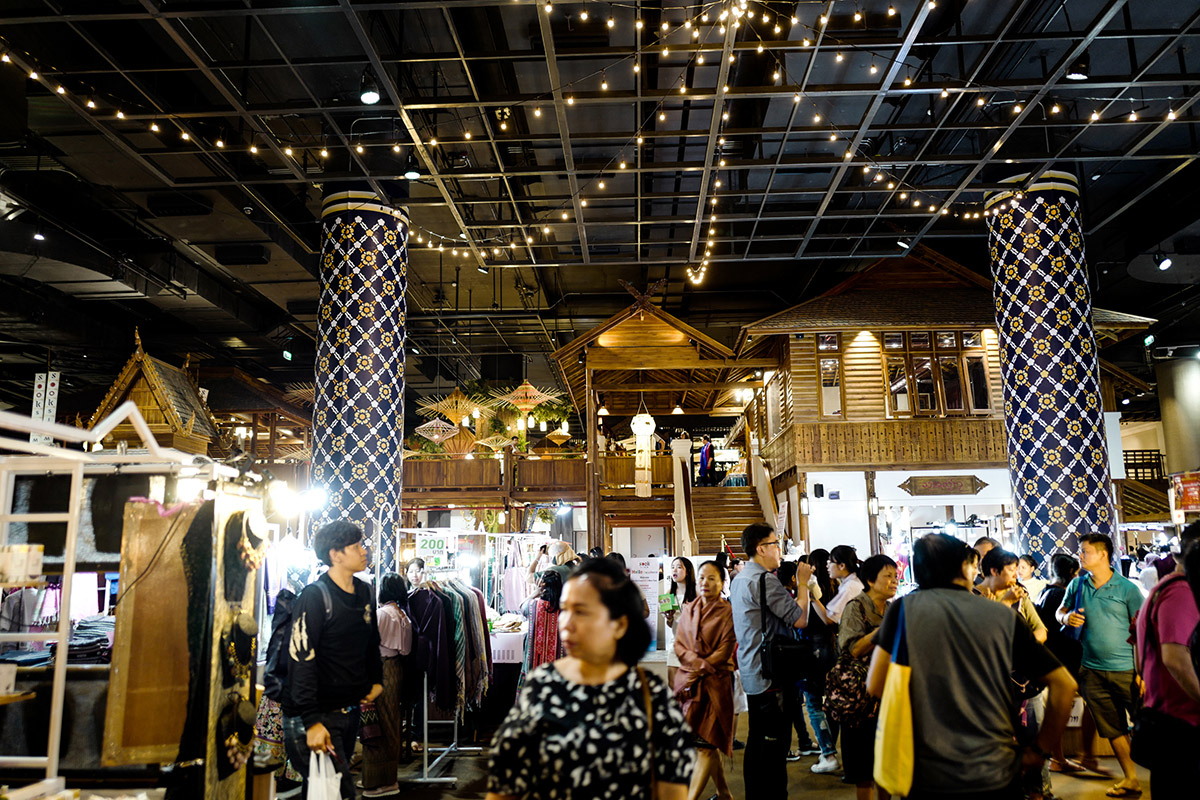 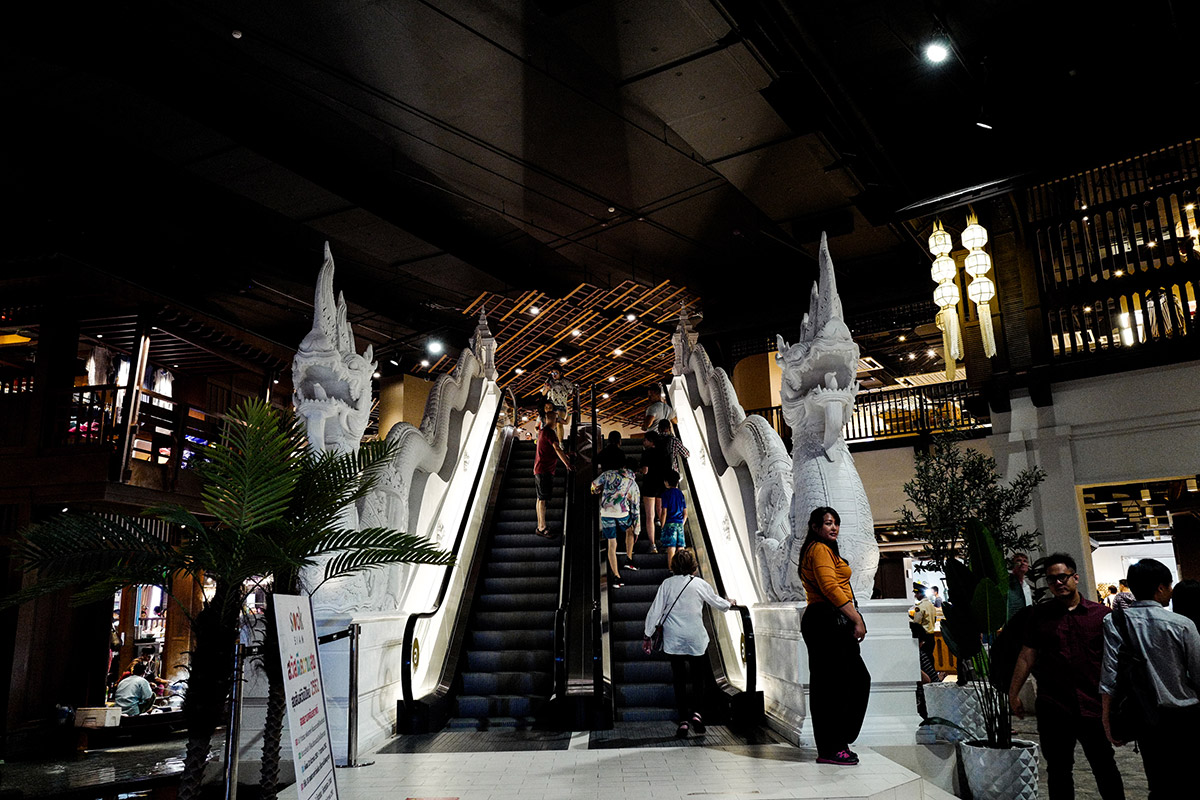 4. Traveller in the age of digital media

In this age of online digital media, the popularity of a place is measured and tracked through social media platforms. Hashtags on Instagram and trends on twitter illustrate popularity. Geolocation data collected from the media reveals emerging tourist attractions. Camera and smartphones have become a tool that defines contemporary traveller experience. The popularity of places constructs through these visual images generates narrative and virtual value. Rating, a number of likes and views have become a valuable asset. The social data has become the new travel guide that redefines the tourism industry forever, listing and scoring places in numeric order and providing modern travellers with choices by their popularity. Nevertheless, authenticity will remain a relevant value in preserving traditional culture and craftsmanship that is difficult to replicate since authenticity is a value that is generated through time and memory. The historical events that occurred in architecture create recognizable images and memories that will continue to co-exist as narratives. The interesting question today is the relationship between authenticity and popularity, the physical value and the virtual value.

Travel for architects is a life-long extracurricular activity even though one might have graduated and already started practising architecture. Travel gives new experiences, rejuvenates and helps pay attention to the changing behaviours of people and places which could be used in our design work. Indeed, what is important for architects should not only be about buildings. A long list of architecture tours could be frustrated, thinking about how much you can see in one day and how fast you can see it.

Sometimes architecture is not about buildings, by not seeing a building and start observing the patterns of people around you could really inspire one’s thinking about design and learning by studying how people react to architecture. And vice versa for non-architects, you might want to tag along with one of your architect friends for once. Looking at buildings could provoke a lot of discussions that reflect our understanding of the built environment, such as the concept of authenticity and fakeness.